Hong Kong (CNN Business)Asia’s biggest economies have managed to escape prolonged fallout from the coronavirus pandemic. Now they just have to make sure rising cases in the rest of the world don’t put their recoveries in jeopardy.

Japan reported Monday that its economy expanded 5% in the July-to-September quarter, allowing it to emerge from recession. That translated to an annual rate of expansion of 21.4%, the fastest pace on record for the world’s third largest economy.
Hours after Japan’s announcement, China released data showing that its recovery is also continuing to pick up steam. Industrial production in the world’s second-largest economy rose nearly 7% last month, beating estimates from economists polled by Refinitiv. Retail sales rose by slightly more than 4% — the fastest pace this year. 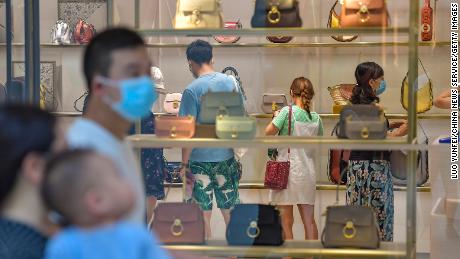 The promising news out of Asia stands in sharp contrast to the West, where many nations are grappling with a resurgence of Covid-19 and have been forced to once again impose restrictions in an attempt to bring their outbreaks under control. Federal Reserve Chairman Jerome Powell reiterated last Thursday that the US economy will need more stimulus from both the government and the central bank to get through the crisis.
The Bank of England warned earlier this month of a douple-dip recession for the UK economy as the country re-entered national lockdown. The European Union is facing a similar fate.

“In large part because of a significantly better containment of the virus, most Asian economies are performing better than their Western counterparts,” said Louis Kuijs, head of Asia economics at Oxford Economics.
He expected most major European economies to shrink this quarter because of new Covid-related restrictions. The United States may record a hit to its growth, too, even if the government there does not lock businesses down, he added.
The challenge now in Asia is how to keep the momentum going, given the slowing growth among major trading partners.
“Lockdowns in Europe and a renewed slowdown in the US … pose the risk that Asia’s export recovery could take a breather,” said Frederic Neumann, co-head of Asian Economic Research and managing director at HSBC. He pointed out that Asian economies depend on global trade, and slow demand from the West could dent the recovery.
“Asia alone cannot pull the global economy out of its slump,” he added.

The Chinese government on Monday acknowledged the risk posed by the continued prevalence of the pandemic elsewhere.
Fu Linghui, a spokesman for China’s National Bureau of Statistics, told reporters in Beijing that outbreaks in Europe and the United States have created uncertainties for China’s exports. Still, he said that the total value of China’s trade has increased this year, bucking the global trend.
Kujis, of Oxford Economics, was also optimistic. Though weakness in the United States and Europe will weigh on trade and investment in Asia, he said, that shouldn’t derail those economies entirely — as long as they can avoid new outbreaks of their own. (Daily Covid infections in Japan recently reached a three-month high, though the country’s numbers are still well below those recorded in United States.)
“If Asian economies can continue to avoid major new lockdowns, the impact of weakness in Europe and the US will only soften the continued recovery in Asia, not undo it,” he said.
Regardless of the state of the pandemic, countries in the region are also attempting to strengthen ties with each other, without the aid of the rest of the world.

This weekend, China, Japan and more than a dozen other countries in Asia Pacific signed the Regional Comprehensive Economic Partnership, a major trade agreement that has been nearly a decade in the making.
“It may reinforce a trend that’s been already underway for decades: that the global center of economic gravity keeps pushing relentlessly to the East,” wrote economists at HSBC in a research note released on Sunday.
Source: Read Full Article