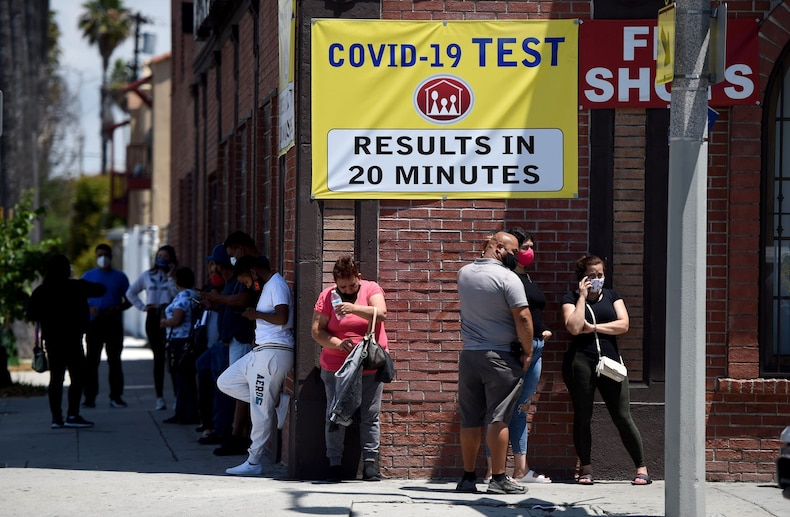 As infection and hospitalization rates for COVID-19 hit records this month, more Americans are growing anxious and are less inclined to head out to eat or shop. Google searches for “anxiety” in the last week reached their highest in 16 years, while searches for “restaurant” and “mall” are almost back to their lowest since March and April, according to DataTrek.

DataTrek said searches for “anxiety” between the start of July up to last week had been 5% higher than the same period in 2019. Queries abated after the first wave in May, but have remained at uniformly high levels for just over 4 months, it added.

“As cases and hospitalizations reach new records, Americans searched for “anxiety” last week more than they have throughout the pandemic yet. In fact, queries for “anxiety” are at a 16-year peak since the start of the series in 2004,” DataTrek co-founder Jessica Rabe said in a note.

Read More: How to trade the ‘McConnell Cap’ as Republican Kentucky senator has become Stimulus-in-Chief, according to a $400 mln wealth manager

News this week that drugmaker Pfizer released promising results of a trial for its COVID-19 vaccine has boosted financial markets. It has also given investors cause to hope that further damage from the virus can be limited. But, Rabe said, with a tough winter ahead, it will take many months to ease ordinary Americans’ concerns.

“…  As much as we welcome news of a vaccine, there’s still many tough months ahead and it will take time to ease people’s anxiety that was created by the virus,” DataTrek said.

Searches for “restaurant” and “mall”, which had mostly recovered to their pre-pandemic levels in October, thanks in part to warmer weather, have now collapsed by about a quarter since then. They are not far off the levels seen in March and April, the note said.

Rabe said: “We expect the accelerating decline in searches for “restaurant” and “mall” to continue as the weather cools and virus cases mount. Restaurants face a difficult winter ahead with limited indoor seating, which will impact overall employment trends in the coming months,” Rabe said.

“Retailers with an efficient online ordering/delivery process should have a successful holiday 2020 with many starting discounts early, but those heavily reliant on physical stores will likely not do as well, given the drop in foot traffic,” she said.

Consumer confidence is steadily picking up. In October, consumer sentiment reached its highest since March, according to the University of Michigan. But it remains well off February’s pre-pandemic levels and the improvement is gradually slowing from one month to the next.

Read more: ETF investing is exploding globally. But to get more than market returns, a Fidelity International ETF expert says investors might need to leverage this secret ingredient

Related posts:
tagged with 'anxie, for, google, searches
Recent News:
Business News:
The best hotel credit cards of December 2020
American, United pause nonstop flights to Shanghai amid concerns over restrictions facing overseas crews
The best American Express cards of December 2020 — from the Amex Platinum to options for cash back
Bribes for Presidential Pardons Scheme Investigated by DOJ
Treasury Secretary Mnuchin faces harsh criticism from Democratic senators over ending Fed programs
This website uses cookies to improve your user experience and to provide you with advertisements that are relevant to your interests. By continuing to browse the site you are agreeing to our use of cookies.Ok