Bidenomics is a heady brew. The Democrats' $US7.9 trillion ($11.1 trillion) blast of extra spending is a step beyond Roosevelt's New Deal. It mimics the Keynesian expansion of the Second World War and consciously aims to run the economy at red-hot speeds of growth.

If enacted in full, it is large enough to lift the US economy out of the zero-rate deflationary trap of the last decade and entirely reshape the social and financial landscape. 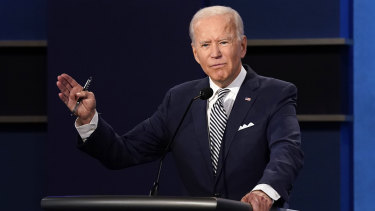 Joe Biden’s plans for the US economy could reshape the social and financial landscape.Credit:AP

The stimulus will be corralled inside the closed US economy by Joe Biden's protectionist "Buy America" policies, his industrial strategy and his carbon border tax (i.e. disguised tariffs against China). This limits leakage.

It is a laboratory of sorts for a post-globalisation experiment in what used to be called "reflation in one country" – before the free flow of goods and capital emasculated sovereign governments.

"It's quite likely that, just as in the Second World War, when we push down on the economic accelerator, we will find that we have been running on one cylinder up until now," said the Roosevelt Institute, now advisers to the Biden campaign.

This is why Moody's Analytics estimates that Bidenomics accompanied by a Democrat clean sweep of Congress would lift American GDP by an extra 4.8 per cent, add an extra seven million jobs and raise per capita income by an extra $US4,800 over the next four years, compared to a clean sweep by Donald Trump. Economic growth would rocket to 7.7 per cent in 2022.

Oxford Economics and Goldman Sachs have reached much the same conclusion, and for mechanical reasons. There is a big economic output gap to fill and Biden's fiscal stimulus is massively front-loaded.

Some $US2 trillion of infrastructure spending is concentrated in the first four years, mostly on the quest for energy independence and US supremacy in green technology. It would be buttressed by further and immediate pandemic support of well over $US2 trillion to rescue near-insolvent state and local governments, and to cover a $US600 weekly cheque to those still unable to work.

Goldman's David Kostin even thinks that Wall Street will be marginally higher over the next couple of years under a Biden plan. Stronger earnings from booming growth will more than offset the hit from Biden's plan to lift corporation tax from 21 per cent to 28 per cent, although not all the way back to the status quo ante of 35 per cent.

How do you pay for this? The theoretical answer – and here lies the nub of the dispute – is that it pays for itself through higher growth and the denominator effect.

Should there be a Democratic clean sweep and a revocation of the filibuster blocking power in the Senate, it would open the floodgates to the greatest economic upheaval in a century. For good or ill.

Gargantuan Democratic deficits would send the debt ratio soaring at the outset but under Moody's "dynamic scoring" the final outcome a decade hence would be much the same under both parties at around 129 per cent of GDP – uncomfortably high either way. The difference is that Biden's legacy economy would by then be $US1.2 trillion larger and the American people would be that much richer.

Oxford Economics assumes that Biden will be forced to compromise on Capitol Hill, resulting in less overall stimulus. Yet the same pattern holds. Growth shoots up in the early years and brings in higher tax revenues. The debt ratio remains the same as it does in the Republican plans.

The policy orthodoxy of recent decades is that economies operate near full potential and therefore that a blitz of public spending largely "crowds out" private spending. It furs up the arteries of production and slowly saps vitality.

Biden's gamble is that these neo-liberal doctrines no longer apply in a world of excess savings, zero rates, and becalmed economies, and have in any case been overtaken by the massive shock of COVID-19. 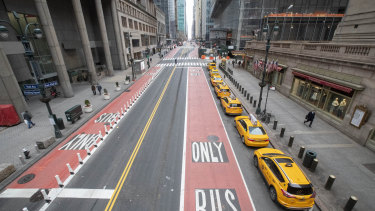 If Biden wins the election, he would inherit an economy battered by the pandemic.Credit:AP

The Roosevelt Institute argues that the lesson of the war economy from 1941 to 1945 is that the US was able to leap-frog supply-side constraints, achieving a virtuous circle of accelerating productivity growth.

Military-industrial mobilisation against fascism tightened the labour market, lifted wages and conjured up aggregate demand. This time the mobilisation will be for the war against carbon. Either does the trick.

The result of Roosevelt's total war economy was the most dramatic fall in income inequality in US history, followed by three decades of "American Dream" and rising living standards. The American Federation of Labour was in full glory. The era had a whiff of social democracy.

It is this levelling process that Bidenomics wishes to replicate. It is a race to prevent COVID-19 leaving the poor further behind and pushing social disintegration to breaking point. The Democratic platform thrashed out with Bernie Sanders and Elizabeth Warren is not to my free market taste. It reads in places like a Soviet five-year plan, replete with top-down targets that second guess the direction of fast-moving technology.

But that is the point. Bidenomics is FDR's war-economy model. In a sense it is the fiscal twin of helicopter money by central banks and the radical approach of modern monetary theory.

Personally, I think that such a plan cuts against the animal energy of American enterprise capitalism. It could degenerate over time into a bureaucratic tangle. But I also think the greatest threat to Western democracies in the 2020s is the feeling that elites are gaming the system and we are no longer in this together. A swing of the pendulum back to the bottom half is a healthy correction.

What we know is that Trumponomics failed. The premise of the corporate tax cuts in 2017 was it would lead to a surge in business investment and to self-sustaining expansion. It never happened. Companies spent the money on share buybacks or hoarded the reserves in cash because there was not enough demand to justify expansion.

Trump's tax reform was a bonanza for the well-off but that strata has a famously low propensity to spend. The rich keep accumulating money in equities and assets, bidding up wealth more than they recycle wealth. It further entrenches the inequality that lies behind the economic pathologies of the 21st century. Growth looked good but that is because Trump was running an exorbitant fiscal deficit at the top of the cycle, racking up dead debt without getting the multiplier effect. More Trump would be more of the same: tax cuts partly offset by a $US750 billion squeeze in education and social outlays, the very spending that injects money directly into the veins of the economy.

American elections have a habit of producing shared power, the checks and balances of gridlock. It is a fair bet that this November will produce a Biden White House constrained by a Republican Senate, implying a tilt of the economic rudder and a modest rise in economic growth.

Should there be a Democratic clean sweep and a revocation of the filibuster blocking power in the Senate, it would open the floodgates to the greatest economic upheaval in a century. For good or ill.