The vaccine news sparked renewed optimism in equities around the world but oil prices slipped in Asian trade after posting the biggest one-day percentage gain in five months.

However, some analysts sounded caution over the speed in which the vaccine could be implemented. 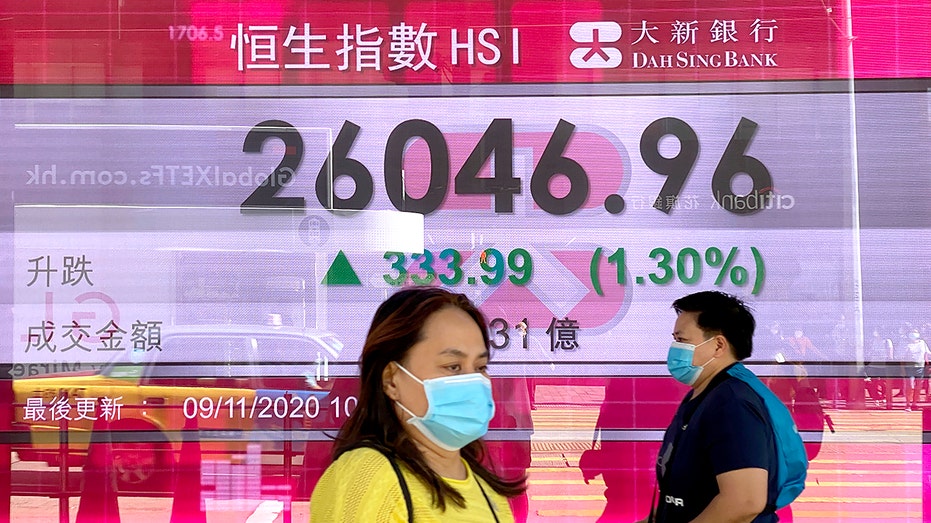 “Given more tests are needed, then the approval process. Manufacturing and distribution would mean the vaccine, if truly effective, is still months away from mass deployment,” said Tai Hui, chief Asia market strategist at JPMorgan Asset Management.

Hong Kong's Hang Seng index futures .HSI was up 1% in early trade but there was marginal weakness in China as the CSI300 Index .CSI300 slipped by 0.24%. MSCI's broadest index of Asia-Pacific shares outside Japan .MIAPJ0000PUS was 0.12% higher.

Airline, travel and tourism stocks across Asia were beneficiaries of the optimism prompted by the vaccine announcement.

“Markets will get ahead of themselves in the short term with the vaccine news but longer term it feels like it is going higher,” Ord Minnett advisor John Milroy said from Sydney.

The stronger performance on Asian markets followed the positive lead overnight from the United States and Europe.

While stocks have also rallied on the assumption that Democrat Joe Biden would be the next U.S. President, the top Republican in U.S. Congress on Monday did not acknowledge Biden as president-elect, raising concerns about a rough transition of power.

Senator Mitch McConnell said in a speech President Donald Trump was well within his rights to look into charges of election “irregularities” but did not offer any evidence of fraud.

Bonds had their biggest selloff since recoiling from March peaks. The yield on benchmark 10-year U.S. government debt US10YT=RR, which rises when prices fall, jumped 10.3 basis points on Monday and held above 0.9% on Tuesday at 0.9099%

However, in Asian trade some of the momentum fell away.

Asian stock markets are mostly higher on Monday following the positive cues from Wall Street Friday amid continued optimism about a new U.S. stimulus bill after President Donald Trump suggested he was once again in favor of a broad relief package.

Investors also digested news that the People’s Bank of China has changed a rule that now makes it cheaper to short the yuan following the currency’s recent sharp gains.

The Australian market is edging higher in cautious trades following the positive cues from Wall Street. Gains by gold miners and banks were offset by weakness in the mining and oil sectors.

Gold miners are sharply higher after gold prices rose to a three-week high on Friday. Evolution Mining is gaining more than 4 percent and Newcrest Mining is rising more than 3 percent.

In the banking space, ANZ Banking, Commonwealth Bank, National Australia Bank and Westpac are rising in a range of 0.1 percent to 0.5 percent.

Among oil stocks, Oil Search is losing more than 2 percent, Santos is lower by more than 1 percent and Woodside Petroleum is down almost 1 percent after crude oil prices declined on Friday.

In the mining sector, BHP Group is declining 0.3 percent and Rio Tinto is down 0.2 percent, while Fortescue Metals is adding 0.5 percent.

The Japanese market is declining after gains in the previous sessions and despite the positive cues from Wall Street Friday. Investors remained cautious as they digested mixed local economic data.

Market heavyweight SoftBank Group is advancing more than 1 percent, while Fast Retailing is down 0.6 percent.

The major exporters are lower on a stronger yen. Mitsubishi Electric, Canon and Sony are declining more than 1 percent each, while Panasonic is down almost 1 percent.

In the tech space, Tokyo Electron is edging up 0.1 percent, while Advantest is adding 0.4 percent.

In the oil sector, Japan Petroleum is advancing more than 1 percent and Inpex is edging up 0.1 percent.

Among the other major gainers, M3 and Sumco are rising almost 2 percent each.

Conversely, Yaskawa Electric is losing almost 5 percent and Citizen Watch is lower by more than 3 percent, while GS Yuasa and JGC Holdings are declining almost 3 percent each.

On the economic front, the Cabinet Office said that the value of core machine orders in Japan was up a seasonally adjusted 0.2 percent on month in August, coming in at 752.5 billion yen. That beat forecasts for a decline of 1.0 percent following the 6.3 percent increase in July.

The Bank of Japan said that the value of overall bank lending in Japan was up 6.4 percent on year in September, coming in at 573.737 trillion yen. That was in line with expectations and down from the 6.7 percent gain in August.

Producer prices in Japan were down 0.2 percent on month in September, missing expectations for a flat reading following the downwardly revised 0.1 percent increase in August.

In the currency market, the U.S. dollar is trading in the upper 105 yen-range on Monday.

On Wall Street, stocks closed higher on Friday, extending gains from the two previous sessions amid continued optimism about a new stimulus bill after President Donald Trump suggested he was once again in favor of a broad relief package. Trump’s comments came amid reports that the White House was planning to offer a $1.8 trillion package, which is up from the administration’s previous $1.6 trillion proposal, but still below the $2.2 trillion bill passed by House Democrats.

The major European markets also moved to the upside on Friday. While the German DAX Index inched up by 0.1 percent, the U.K.’s FTSE 100 Index and the French CAC 40 Index both climbed by 0.7 percent.

Crude oil prices drifted lower on Friday as traders made largely cautious moves, weighing demand and supply positions in the market. WTI crude for November ended lower by $0.59 or about 1.4 percent at $40.60 a barrel.

Asian stock markets are mixed on Friday amid cautious trades following the mixed signals from U.S. lawmakers on stimulus talks. While U.S. President Donald Trump said administration officials and Democrats are “starting to have some very productive talks”, House Speaker Nancy Pelosi rejected the idea of passing a stand-alone bill providing aid to airlines without a broader relief package.

The Australian market is edging lower after four straight days of gains. The market had opened higher following the overnight gains on Wall Street amid continued optimism about a coronavirus stimulus bill.

Gains by oil stocks and gold miners were offset by weakness in the mining and banking sectors.

In the mining sector, Rio Tinto and Fortescue Metals are declining almost 1 percent each, while BHP Group is down 0.1 percent.

Among the big four banks, National Australia Bank is losing 1.0 percent, while ANZ Banking and Westpac are lower by 0.6 percent each and Commonwealth Bank is down 0.3 percent.

In economic news, the Australian Bureau of Statistics said that the value of owner-occupied home loans issued in Australia was up a seasonally adjusted 13.6 percent on month in August, coming in at A$16.28 billion. That was in line with expectations following the 10.7 percent increase in July.

The major exporters are lower on a stronger yen. Panasonic and Canon is losing more than 1 percent, while Mitsubishi Electric is lower by almost 1 percent and Sony is down 0.6 percent.

In the tech space, Tokyo Electron is declining 0.6 percent and Advantest is down 0.2 percent.

Among the other major gainers, Seven & I Holdings is rising more than 4 percent, while M3 and GS Yuasa are higher by more than 3 percent each.

Conversely, JGC Holdings, Daiichi Sankyo, Mitsubishi Motors and Tokyo Tatemono are losing more than 3 percent each, while West Japan Railway and Citizen Watch are lower by almost 3 percent each.

On the economic front, the Ministry of Internal Affairs and Communications said that the average of household spending in Japan was down 6.9 percent on year in August, coming in at 276,360 yen. That was in line with expectations following the 7.6 percent annual decline in July.

In the currency market, the U.S. dollar is trading in the upper 105 yen-range on Friday.

Elsewhere in Asia, Hong Kong and Malaysia are also lower. Meanwhile, Shanghai is rising more than 1 percent after the National Day holidays, New Zealand and Indonesia are modestly higher, and Singapore is edging higher. The markets in South Korea and Taiwan are closed on Friday for holidays.

On Wall Street, stocks closed higher on Thursday, reflecting continued optimism about a coronavirus stimulus bill following the latest comments from President Donald Trump. In an interview with Maria Bartiromo on Fox Business, Trump said administration officials and Democrats are “starting to have some very productive talks.” Meanwhile, House Speaker Nancy Pelosi rejected the idea of passing a stand-alone bill providing aid to airlines without a broader relief package.

The major European markets also moved to the upside on Thursday. While the German DAX Index advanced by 0.9 percent, the French CAC 40 Index and the U.K.’s FTSE 100 Index rose by 0.6 percent and 0.5 percent, respectively.

Crude oil prices rose sharply on Thursday due to the impact of Hurricane Delta on crude output in the Gulf of Mexico, and on hopes the U.S. policymakers will come out with some sort of stimulus sometime soon. Crude for November delivery jumped $1.24 or about 3.1 percent to $41.19 a barrel.

TOKYO — Asian shares were mostly higher in muted trading Monday, as worries about the pandemic kept optimism in check despite a rally that closed out last week on Wall Street.

Indicators out of China, such as trade and inflation readings, also remain on investors' minds. 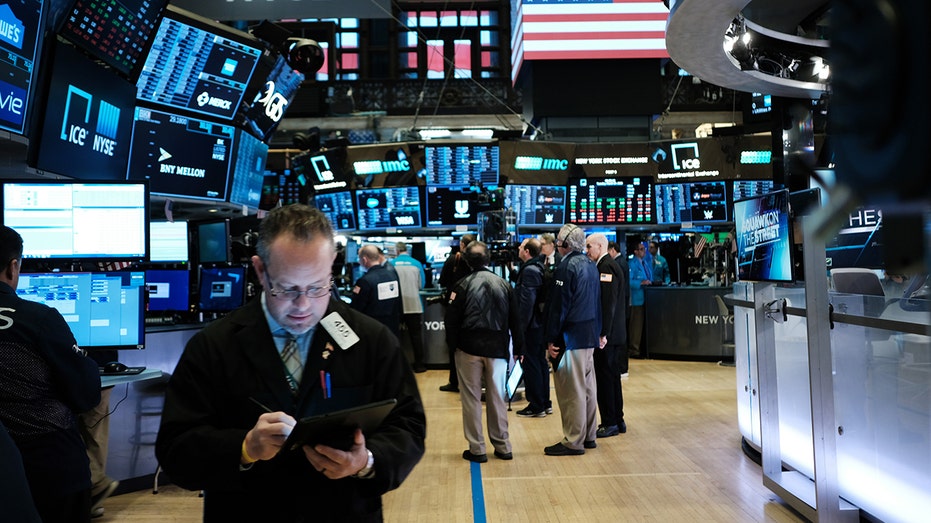 Asian shares were mostly higher in muted trading Monday, as worries about the pandemic kept optimism in check despite a rally that closed out last week on Wall Street. (Photo by Spencer Platt/Getty Images)

Wall Street closed out its best week in three months on Friday as negotiations on Capitol Hill aimed at delivering more aid to the ailing U.S. economy encouraged investors. The S&P 500 rose 0.9% to 3,477.14, its third straight gain. The benchmark index ended the week with a 3.8% gain, its strongest rally since early July.

Signs as of late Sunday were not promising. A new White House coronavirus aid proposal got bad reviews from both ends of the political spectrum. House Speaker Nancy Pelosi rejected the most generous Trump administration plan to date as “one step forward, two steps back.” The Republicans who control the Senate are dismissing it as too expensive and a political loser for conservatives.

On Friday the White House increased its offer to $1.8 trillion, up from $1.6 trillion, according to a Republican aide familiar with the plan. Pelosi’s most recent public proposal was about $2.2 trillion, though that included a business tax increase that Republicans won’t go for.

Worries persist that Congress and the White House won’t deliver more support for the economy as it reels from the impact of the pandemic and concerns that stock prices simply got too high during the summer.

Economists say the outlook is grim without such support, and the chair of the Federal Reserve has said repeatedly it will likely be necessary.

Other major challenges remain, chief among them the still-spreading coronavirus pandemic, highlighted by Trump’s own COVID-19 diagnosis.

In energy trading, US. benchmark crude lost 45 cents to $40.15 a barrel in electronic trading on the New York Mercantile Exchange. It lost 59 cents to $40.60 per barrel on Friday.

Brent crude, the international standard, fell 44 cents to $42.41 a barrel.