Like the more than 100 million Americans, activist Allie Young voted early in the 2020 presidential election, but she also mobilized fellow Diné, or Navajo, people to join her on horseback. And then, on Election Day, she led another ride.

Young, who founded the grassroots organization Protect the Sacred to empower and educate Indigenous people, spearheaded the Ride to the Polls initiative to encourage her fellow voters to saddle up and cast their ballots early. She was inspired after hearing concerns from Native voters, especially young ones, who felt uninspired to participate in this year’s election considering its links to colonial tradition and the divisive state of the country.

“It’s important to me that my community and Native communities across the country get out to vote, because we weren’t always afforded this right—our ancestors had to fight for our right to vote, and so we owe it to them, because we are their wildest dreams,” Young tells BAZAAR.com via email.

Navajo Nation, the largest Native American reservation in the United States, is located primarily in the northeast corner of Arizona, spanning to parts of New Mexico and Utah. The land is vast, but the early voting sites and ballot drop boxes are slim. The New York Times reported that in more than 18,000 square miles of Navajo Nation in Arizona, there are only 27 postal locations, some of which operate for only three hours a day, equating to having only 13 mailboxes throughout the entire state of New Jersey. Young also notes that the coronavirus pandemic has slowed down postal service on the land, making mail-in voting even harder. Further, an appeals court recently refused to grant an extension to count ballots mailed from Navajo Nation. 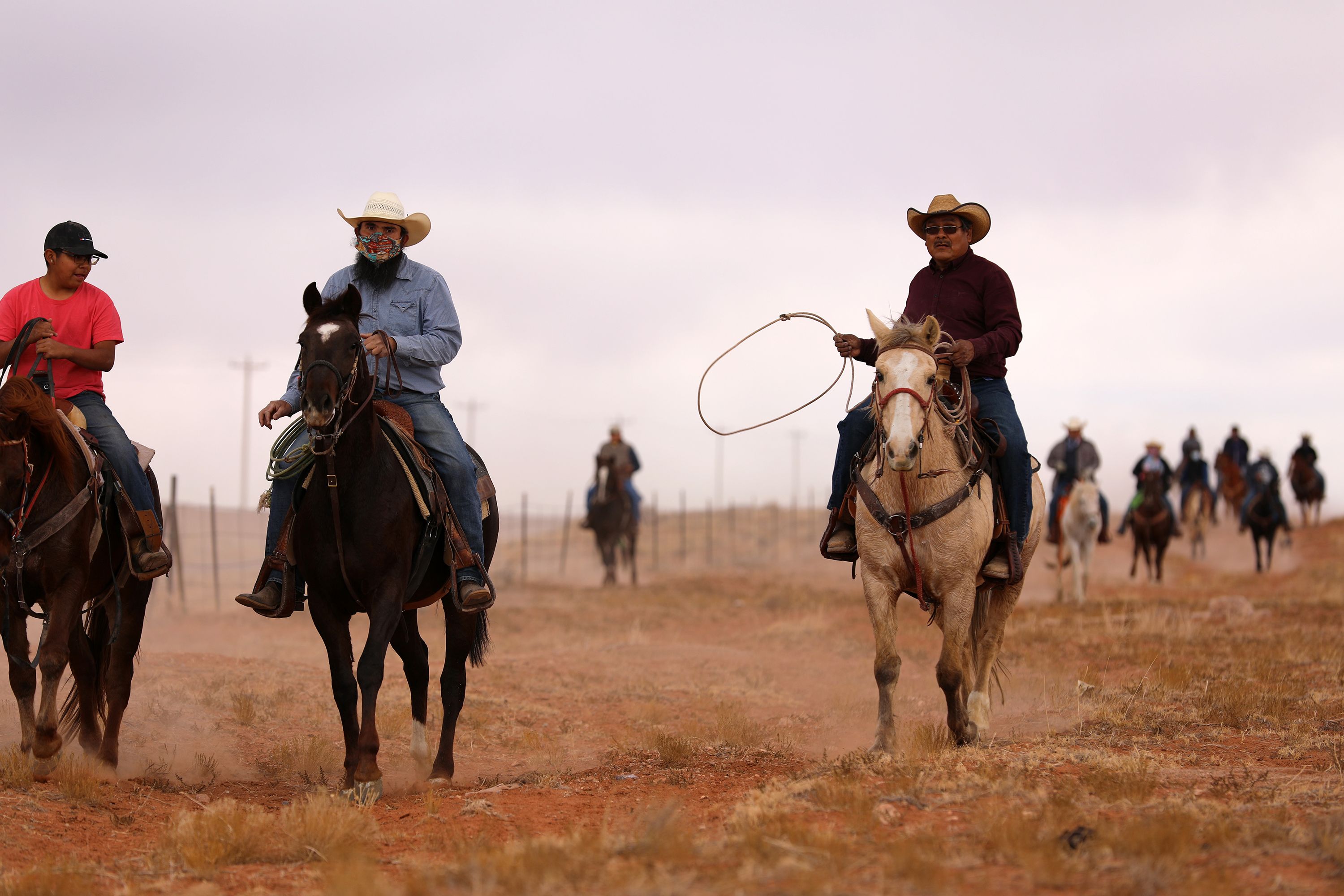 On October 20, Young led a group of voters on horseback to an early polling site in Kayenta, Arizona and then organized another ride the morning of October 30. On Election Day, she led a final group (40 people were confirmed to attend) to the polls. “We rode some strong #HorseMedicine to the polls today in #NavajoNation #Arizona, to not only vote, but to restore beauty, balance, strength & healing across this nation,” she wrote of the event on Instagram.

Below, Young talks to BAZAAR.com about saddling up to cast her ballot, and encouraging others to do the same.

Tell me about what inspired you to start the Ride to the Polls movement. Why is it important to you?

My dad is really the person who inspired me to start Ride to the Polls. He told me he wasn’t feeling motivated to participate in this election because of the disarray we’re in as a nation and that he was feeling frustrated about the divisiveness that is plaguing our communities. But then, he had a vision of our people riding on horseback to heal our country, and that’s when he mentioned doing a trail ride to get out the vote.

I thought about it for a bit and reflected on the teachings from my parents about how the horse is used in many of our ceremonies to heal and regain strength. When I connected voting back to our culture and spirituality, it made sense to me that a trail ride is exactly what we needed to do to motivate our Diné people. I picked up the phone and called my dad back, and I told him, “Let’s do it. Let’s do a trail ride to the early voting site in Kayenta.” I don’t think he expected me to come back with a plan to fulfill his vision, because he sounded surprised. I was also doing it so that he could get excited and motivated to vote, and it worked! 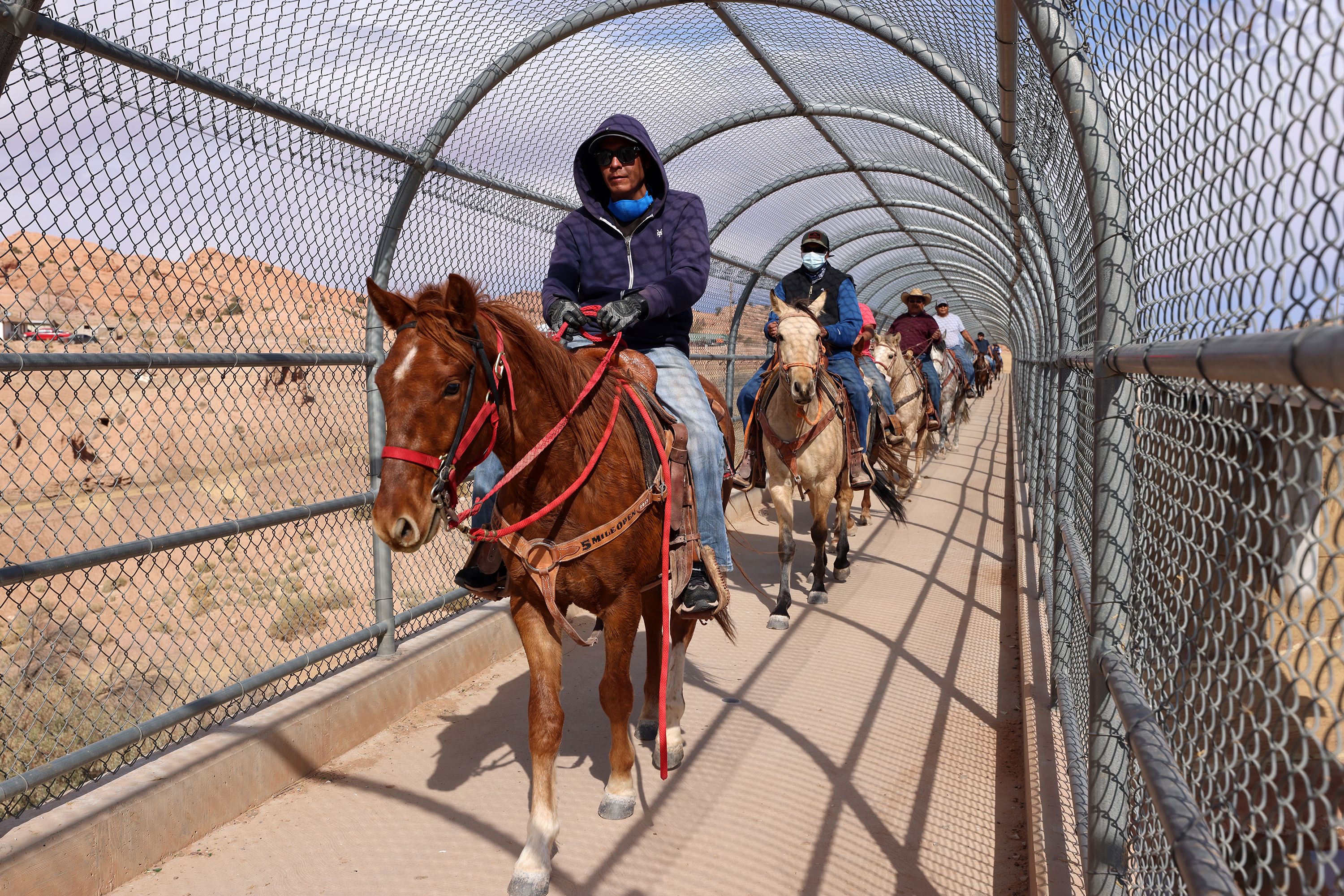 I also decided to organize the ride, because of what I was hearing about our Native young voters, that they, too, weren’t feeling so motivated to participate in this year’s election. I was hearing that our young people were feeling reluctant to participate in a colonial system that has never worked for our people, which is a very valid point, but I wanted to communicate to them that voting in this election can help us get closer to the kinds of decisions we want elected officials to be making for the progress we want to see in our communities.

We know that our youth are more educated than ever and have a burning desire to reconnect to our cultures, languages, and traditions, so I wanted to do something where we could take action together that is rooted in our culture—an action that our ancestors and elders took to ensure that they were exercising the right that our ancestors fought for. We hear stories about how our grandparents and their parents didn’t have cars, but they still rode on horseback for miles and hours just to vote. By communicating this history and reminding our youth of these stories, I hope that they’ll be motivated to follow in our ancestors’ footsteps, and that they’ll join us in making our voices heard with our votes. It’s my hope that they’ll take this action to protect the sacred with their votes. 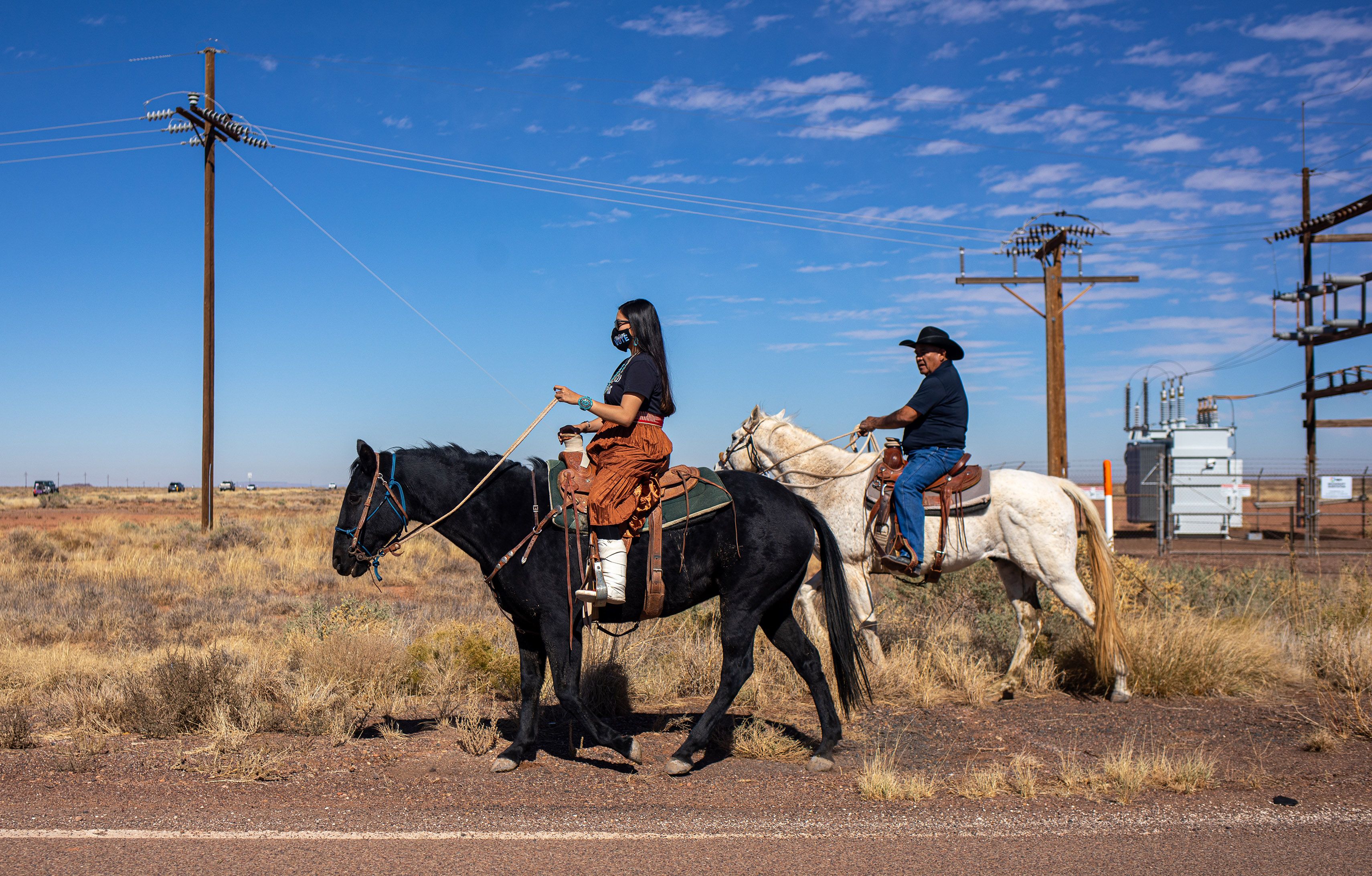 What are some difficulties of and barriers to voting in Navajo Nation? What would you like to see change?

A barrier to voting is the fact that the postal system in remote areas of the Navajo Nation is a failure, which makes it difficult for our community to participate in opportunities that are supposed to make our civic duty simpler, like mail-in voting. The pandemic has also slowed down the postal service on the reservation, because of lockdown and stay-at-home orders in place to contain the spread in our nation. 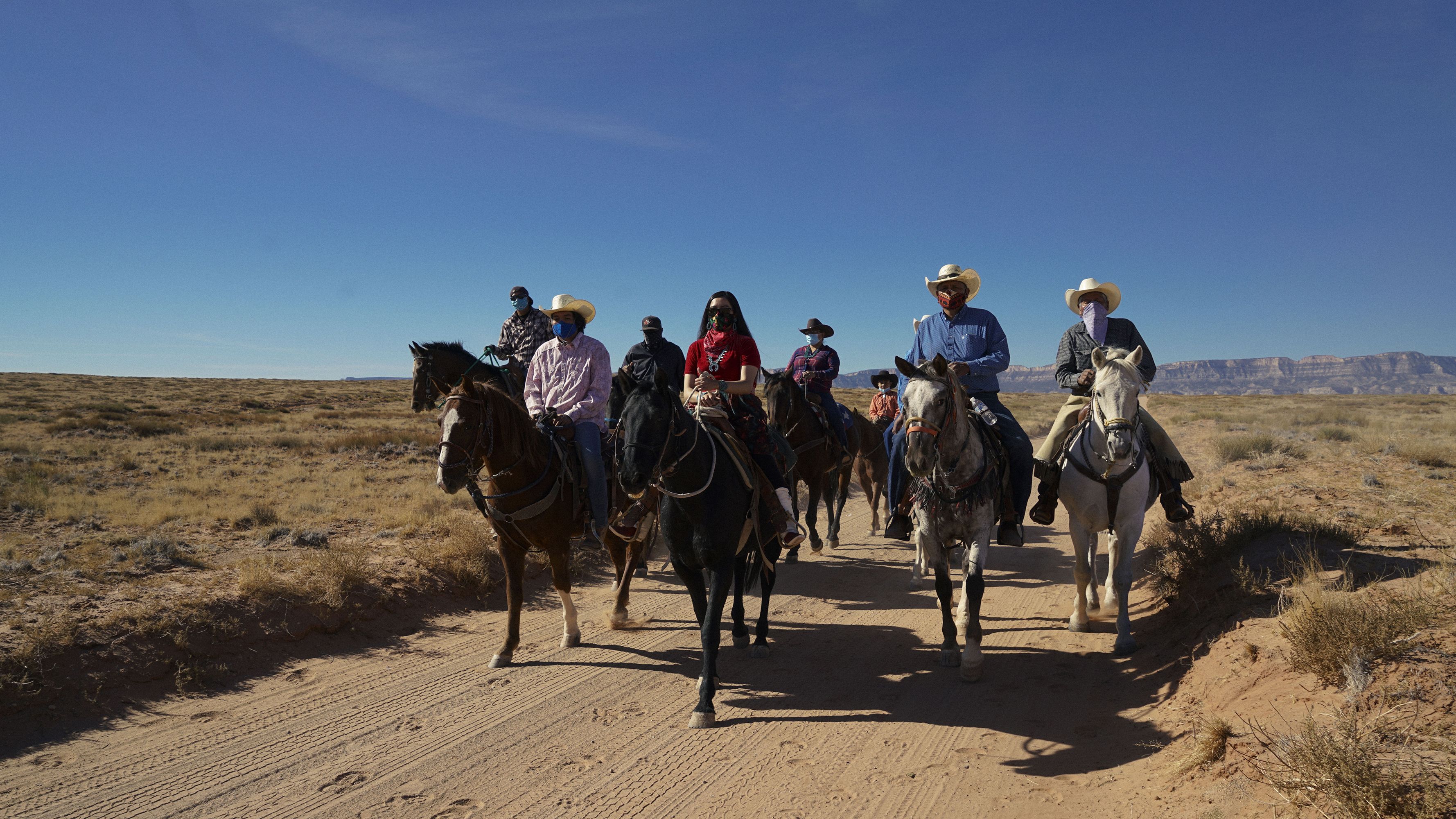 What does it feel like to be out on the road with your fellow riders? What does the atmosphere feel like as you head to the polls together?

Being out upon Mother Earth, in our homelands, with my fellow riders makes me feel proud and connected with my culture, people, and the horse’s and Mother Earth’s spirits. I feel that we are brought back to Hózhó—the Beauty Way, which is our Diné way of life—where balance is restored and everything finishes in beauty.

The atmosphere feels like a renewed sense of self, purpose, and hope. It feels like our ancestors are among us, watching over us, and making the journey with us. Some moments are quiet and serene, as you only hear the wind created by the strong and steady motion of the horses, and the sounds of our four-legged and winged relatives. At the same time, you’re looking out beyond the horizon where you see miles and miles of untouched earth (untouched by humans, that is), reminding us of what we’re voting for and fighting to protect, because that kind of beauty shouldn’t be built upon—not every piece of land needs to be built upon or drilled into. The atmosphere is a powerful feeling that seeps into your spirit and instills renewed energy, beauty, balance, and resilience, and that’s how we show up to the polls and are ready to vote for our children’s future and the next seven generations. 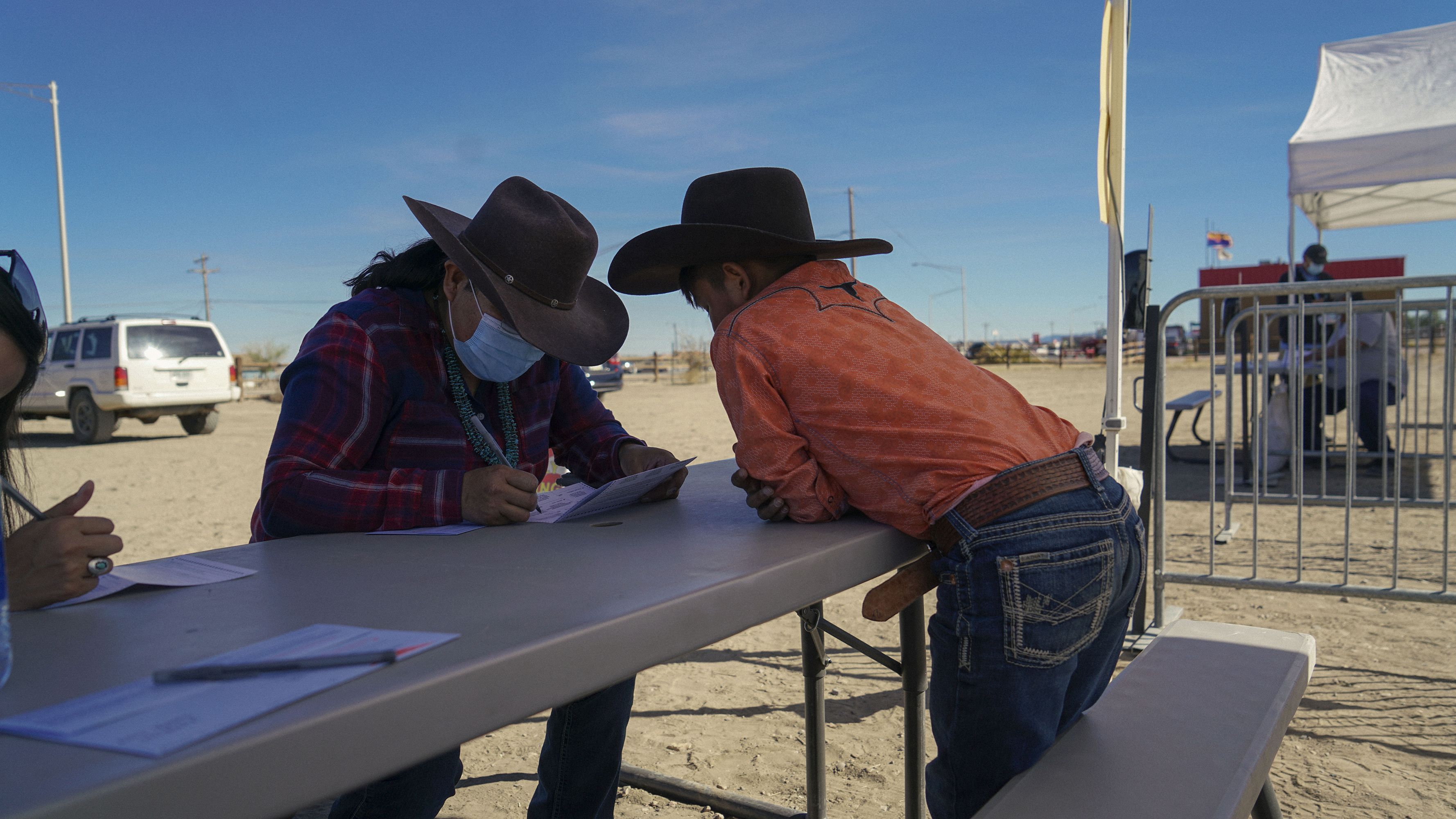 Have you seen others picking up the Ride to the Polls initiative in their own communities?

I haven’t seen others picking up the Ride to the Polls initiative, or at least I haven’t been made aware of other rides happening in the Navajo Nation or other tribal communities, but it’s something I hope to see. I have seen rides to the polls on horseback in other communities, like the Black and Latinx communities, but I don’t know if we inspired them. I do know that I would love to ride with them one day. I love what the Compton Cowboys do and how they started riding their horses in the streets to protest how our Black relatives are being mistreated in this country. I would love to ride with them one day or be in conversation with them about how the horse spirit and horse medicine influences and affects them. 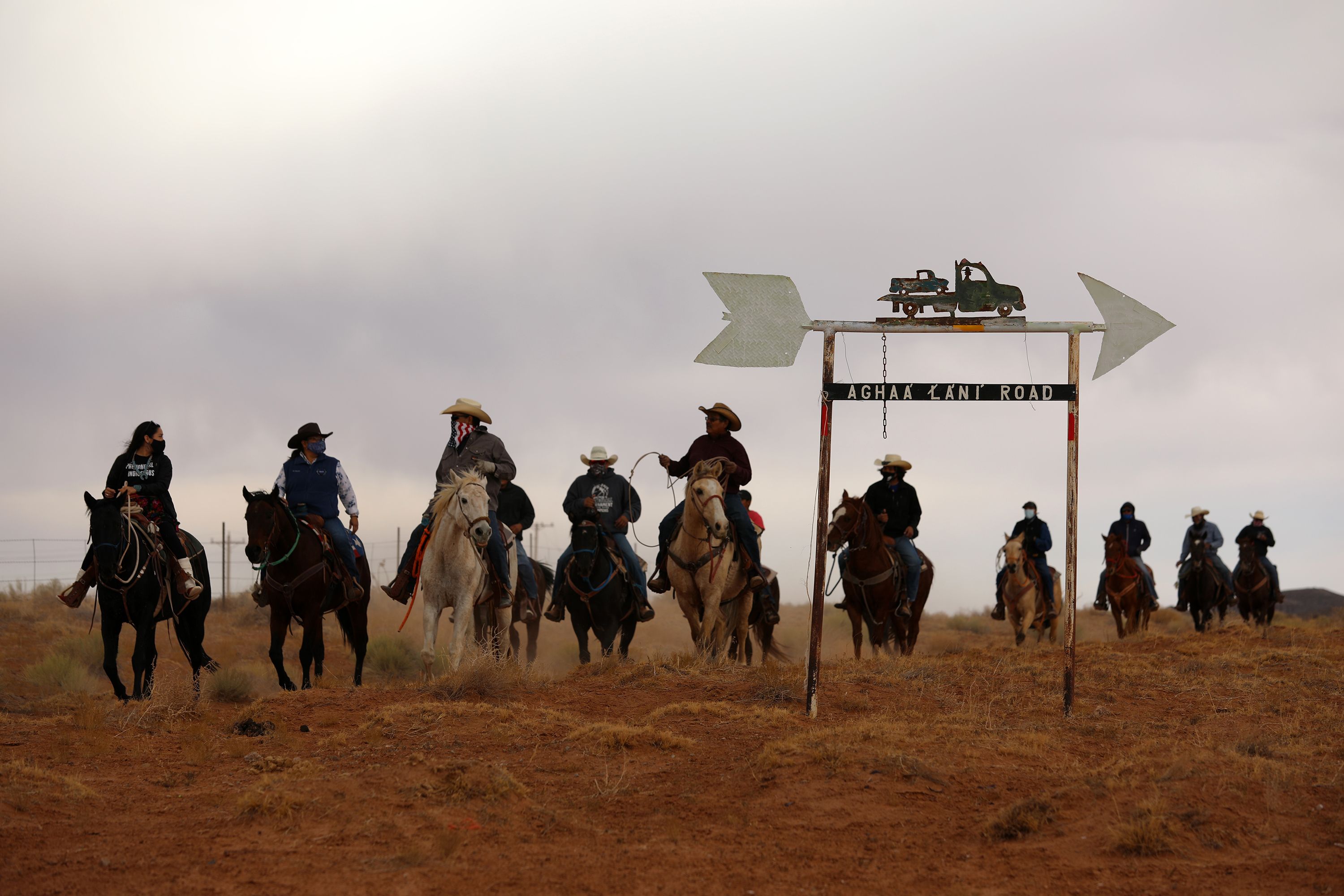 Related posts:
tagged with Activist, Allie, Mobilized, Young
Recent News:
Business News:
South Africa Expects First Virus Vaccine Delivery by Mid-2021
Ford Delays Bronco SUV Due to Virus-Related Supplier Problems
Buyout Titan Bravo Sees Future of Subscriptions, Not Leverage
Cramer's week ahead: Next week may be difficult for the markets without stimulus progress
How to earn, redeem, and maximize United MileagePlus miles — even if you're not a frequent flyer
This website uses cookies to improve your user experience and to provide you with advertisements that are relevant to your interests. By continuing to browse the site you are agreeing to our use of cookies.Ok