Five technology giants were scheduled to report earnings after Wall Street closed on Thursday (early Friday AEDT), providing the latest indication of whether they are rebounding from an economic slowdown earlier this year.

The results come a day after the CEOs of Facebook, Google and Twitter testified before the US Senate Commerce Committee, rebuffing accusations of anti-conservative bias and promising to aggressively defend their platforms from being used to sow chaos in next week’s election.

Apple and Google's parent Alphabet were also reporting results, with Apple's yet to come out at the time of publication of this report.

Here's an overview of their earnings reports, and investors' early reactions. 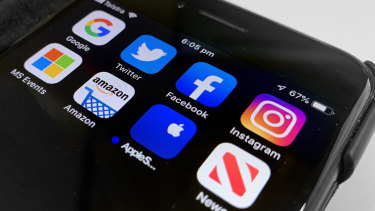 Google’s corporate parent Alphabet returned to robust financial growth during the summer. In the previous quarter, it suffered its first-ever quarterly decline in revenue amid the economic slowdown stemming from the COVID-19 pandemic.

The company’s revenue for the July-September period rose 14 per cent from the same time last year to $US46.2 billion ($65.8 billion). Its profit soared 59 per cent to $US11.2 billion, or $US16.40 per share. Both figure easily surpassed analyst estimates, lifting Alphabet’s stock price by 9 per cent in Thursday’s extended trading after the numbers came out.

The rebound, as usual, was propelled by the ad spending that has established Google has one of the world’s most proficient moneymaking machines.

Facebook said its third-quarter profit and revenue continued to grow along with its worldwide user base, but looking ahead to 2021 the company predicted a “significant amount of uncertainty.”

Analysts were expecting earnings of $US2.18 per share on revenue of $US19.80 billion, according to a poll by FactSet.

The social media giant’s average monthly user base was 2.74 billion as of September 30, up 12 per cent from a year earlier.

Amazon continued to benefit from shopping trends during the pandemic, reporting record profit and revenue during the third quarter. The company reported net income of $US6.3 billion in the three months ending September 30, nearly triple that of the previous-year period.

Earnings per share came to $US12.37, about $US5 more than Wall Street analysts expected. Revenue soared 37 per cent to $US96.1 billion, also beating expectations.

The online shopping giant is also expecting a big end to the year as the Christmas shopping season picks up. Amazon said on Thursday that it expects fourth-quarter sales to rise between 28 per cent and 38 per cent from a year ago to between $US112 billion and $US121 billion.

The last three months of the year are always Amazon’s biggest, due to Christmas. But this year, Amazon also held its Prime Day sales event during the quarter for the first time after postponing it from July to October due to the pandemic. Prime Day has become one of the company’s busiest shopping events of the year.

“We’re seeing more customers than ever shopping early for their holiday gifts,” said Amazon CEO and founder Jeff Bezos in a written statement. “Which is just one of the signs that this is going to be an unprecedented holiday season.”

Twitter posted much stronger than expected third-quarter results thanks to surging advertiser demand. But while its user base continued to grow, Wall Street grumbled and shares plunged after hours.

Twitter had 187 million daily users, on average, in the third quarter. That’s up 29 per cent from a year earlier, thanks to people signing up to follow US politics and current events worldwide, but below analysts’ expectations of 195.6 million. The company no longer discloses monthly user figures.

The company predicted uncertainty going forward, due in part to the upcoming US election and said it is “hard to predict how advertiser behaviour could change.”

Related posts:
tagged with amazon, facebook, google, tech
Recent News:
Business News:
South Africa Expects First Virus Vaccine Delivery by Mid-2021
Ford Delays Bronco SUV Due to Virus-Related Supplier Problems
Buyout Titan Bravo Sees Future of Subscriptions, Not Leverage
Cramer's week ahead: Next week may be difficult for the markets without stimulus progress
How to earn, redeem, and maximize United MileagePlus miles — even if you're not a frequent flyer
This website uses cookies to improve your user experience and to provide you with advertisements that are relevant to your interests. By continuing to browse the site you are agreeing to our use of cookies.Ok