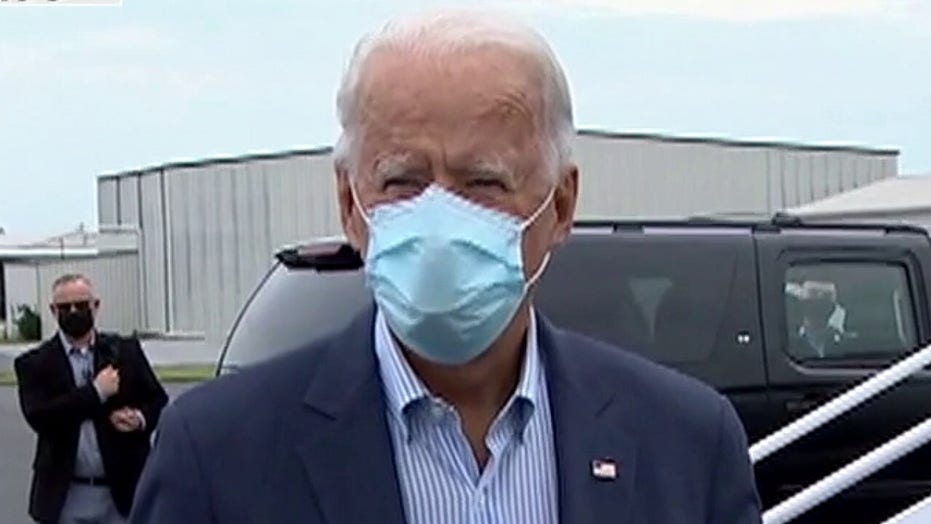 Biden: The only court packing going on right now is by Republicans

Democratic nominee Joe Biden said reporters should be focused on Republicans pushing through a Supreme Court nomination, rather than his opinion on court packing.

“The only court packing going on right now is going on with Republicans… It's not constitutional what they’re doing,” Biden told reporters on Saturday.

“We should be focused on what's happening right now; the only packing going on is this country is being packed now by the Republicans, after the vote has already begun,” the former vice president continued.

“I’m going to stay focused on it so we don't take our eye off the ball.”

Biden sidestepped questions about his opinion on packing the Supreme Court on Friday again, saying voters don’t “deserve” to know his opinion on the matter before the election.

Biden was asked in Las Vegas about his position on packing the court with extra justices — something that has seen support from a number of Democrats, particularly since President Trump announced his intention to confirm Barrett to the seat left vacant by the death of Justice Ruth Bader Ginsburg.

Biden, who opposed court packing in the primary, refused to answer the question on Thursday, saying “you’ll know my position on court-packing the day after the election.”

On Friday, a KTNV reporter asked him again about whether he backs court packing and said: "This is the number one thing that I've been asked about from viewers in the past couple of days.”

“Well, you’ve been asked by the viewers who are probably Republicans who don't want me continuing to talk about what they’re doing to the court right now,” Biden responded

“No they don’t…. I'm not gonna play his game, he’d love me to talk about, and I’ve already said something on court packing, he’d love that to be the discussion instead of what he’s doing now,” Biden said, likely referring to President Trump.

During the Democratic presidential primaries, Biden said he opposed a move to expand – or pack – the high court. But with Democrats virtually powerless to stop the president and Senate Republicans from pushing through Barrett’s nomination ahead of the Nov. 3 election, and tilting the court’s conservative majority to 6-3, many on the left are now calling for an expansion of the court to rebalance its ideology.

Biden first refused to answer questions on court packing when pressed on the matter by President Trump and moderator Chris Wallace during last week’s debate.

"Whatever position I take on that that will become the issue. The issue is, the American people should speak. You should go out and vote. You're in voting now. Vote and let your senators know how you strongly you feel," Biden said.