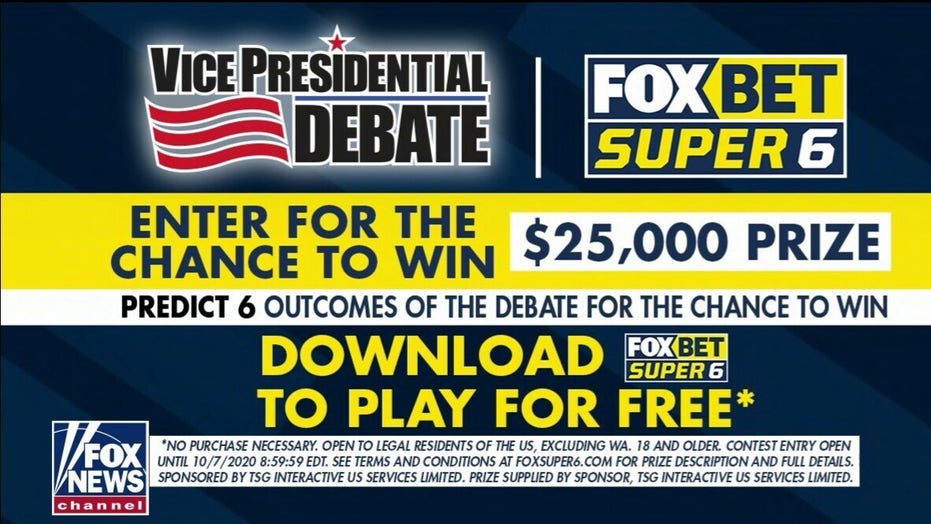 Viewers of last week's first debate between President Trump and Joe Biden were able to enter for a chance to win $25,000 through Fox Bet Super 6, a free-to-play app that typically focuses on sporting events but instead offered prizes for correct predictions related to the high-stakes Sept. 29 showdown.

FOX Bet Super 6 has given away more than $1.4 million since it launched in September 2019, primarily to winners of its weekly NFL contest.

Users play by submitting their answers to six questions centered around possible outcomes of Wednesday's debate.

A $25,000 prize pool is guaranteed to be given away by FOX Bet, with the cash being split across the contest's top performers.

FOX Bet interim CEO Kip Levin told Fox News prior to the first Trump-Biden debate the game is a "fun, lighthearted way for you to engage."

"It’s not gambling because of the free-to-play model," he explained. "Super 6 is risk-free. Customers are not wagering anything – it’s a free entry to answer some questions, engage in the debate in a new way, and potentially win some money if your predictions were correct."

FOX Bet Super 6 is available nationwide with the exception of Washington state.

FOX Bet is an online and mobile sportsbook originally developed through a first-of-its-kind national media and sports wagering partnership in the United States between The Stars Group Inc. and FOX Sports, a unit of Fox Corporation. On May 5, 2020, Flutter Entertainment Plc announced its acquisition of and subsequent merger with The Stars Group.”