When veteran broadcaster Alan Jones signed on to exclusively broadcast on Sky News Australia, the network celebrated bringing on one of the biggest names in Australian media.

The titan of Australian breakfast radio had just retired at the top of the ratings in Australia’s toughest market — ostensibly because his workload was "detrimental" to his health — and was already a regular fixture of the News Corporation-owned television station. 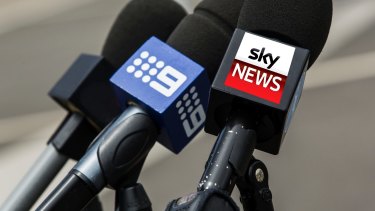 Sky News has quietly become one of the biggest local news organisations on social media.Credit:Dominic Lorrimer

The announcement of a new weekday evening prime time television show for the controversial media figure was a coup for a network that was trying to emulate the success of Fox News with its own highly partisan talk show line-up of Australian commentators.

It was hoped that Jones would bring his massive radio audience with him.

He didn’t. Only a week into his tenure, Alan Jones had fewer than 60,000 viewers. By comparison, the ABC’s flagship news program 7.30 gets more than ten times that and both Seven and Nine’s evening news bulletins regularly reach more than a million viewers.

But the coverage of Jones and Sky News ratings was missing a much more interesting story.

Sky News Australia had successfully built a Fox News-like online operation in Australia, making it one of Australian media’s digital leaders with a reach that dwarfs its terrestrial audience numbers.

Remarkably, it has taken just over a year to cement its place as one of the nation’s loudest online voices, despite having a significantly smaller operation than its competitors. On YouTube, its videos have been viewed 500 million times, more than any other Australian media organisation.

Facebook posts from its Page had more total interactions last month than the ABC News, SBS News, 7News Australia, 9 News and 10 News First Pages – and they’ve had more shares than all of them combined.

University of NSW’s Associate Professor David McKnight, a media researcher who’s written books including "Rupert Murdoch: An Investigation of Political Power", said he was surprised to hear about the size of Sky News Australia’s digital audience.

"Most people look at the live viewership and they see very small numbers on these shows. What these numbers show is the possibility of a very big audience in Australia and beyond," Dr McKnight said.

Sky News has grown this audience by focusing on producing highly partisan opinion content targeted at a global audience.

A new approach to digital

When former editor-in-chief of the Australian Paul Whittaker took over as head of Sky News Australia in late 2018, he was told to "continue expanding Sky News to reach more Australians”.

The channel had already changed from a 24/7 cable news channel best known for being consumed by politicians and their staffers to a station increasingly watched by average Australians, particularly as it began to broadcast on free-to-air in regional areas. 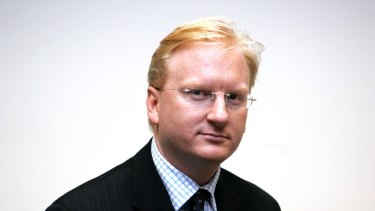 Sky News chief executive Paul Whittaker has made crucial changes to the company since his arrival.

"Most people see Sky News’ impact as its effect on business leaders, politicians, the political class, which is very influential but is small," Dr McKnight said.

Its television audience has grown since Whittaker took over. Sky News Australia is one of the top channels on Foxtel, reaching more than 800,000 unique viewers. Still, the channel’s ratings pale in comparison to its free-to-air competitors. But the real growth has been happening on the digital side.

According to current and former Sky News Australia employees, two things happened in mid-2019 that changed the course of the channel’s digital operation.

The first was hiring digital editor, Jack Houghton, previously at the Daily Telegraph. The second was more intense discussions with tech companies about their digital strategy. In August the company announced new partnerships with YouTube and Facebook. (As part of these partnerships, the company also stopped posting videos to Twitter.)

Following these discussions and partnerships, there was a push to produce a specific type of video that would perform well on these platforms. Specifically, that meant videos longer than three minutes.

This favoured opinion such as editorials or panel interviews over news content, which is generally shorter and more expensive to produce.

According to one former Sky News Australia employee, the digital side of operations "gained credibility in News Corp" as videos were cross-posted across different News Corporation websites and were embedded in articles.

The channel now puts out dozens of videos every day which are between three and six minutes in length on average, primarily taken from their ‘After Dark’ opinion coverage produced each evening.

According to social media analytics tool Social Blade, the YouTube channel had fewer than 70,000 subscribers in June 2019. The channel didn’t upload a video between February 2017 and April 2019.

Today, it has more than 900,000. This puts it second among Australian news publications behind only ABC News, which has more than 1.2 million.

Sky News Australia’s Facebook following is the smallest out of all of Australia’s television news channels’ main Pages, except for Channel 10. It has accumulated just 730,000 likes, far behind ABC News’ 4.13 million.

But its reach likely beats all others. Facebook doesn’t offer publicly accessible reach or viewing metrics, but interactions — reactions, comments and shares — offer an idea.

And on that metric, Sky News Australia had 5.69 million interactions in October 2020 out of the 16.06 million recorded by Australia’s major broadcast television’s Facebook Pages. The account had more than 890,000 of the 1.6 million shares across all the Pages.

Sky News Australia’s videos are also hosted on their website. Metrics for these views aren’t publicly available, but in July it was reported that the website had recorded an average of 50 million views per month in 2020, up more than 400 per cent year on year.

The Pages’ interaction rate — a metric that shows you how engaging a post is by dividing the number of interactions an average post gets by the account’s follower count — is off the charts compared to other news media outlets.

Part of the reason for their success appears to be their close coverage of international affairs, particularly the topics favoured by America’s right-wing media ecosystem.

Unlike cable or terrestrial television, Sky News Australia’s digital content isn’t limited to Australian audiences. In fact, part of the strategy has been to try to cater to a potentially much larger global audience.

Not a single one of their top 10 videos on YouTube by views is about Australia. Of those videos, five are about US politics, three are about COVID-19, one is about Jeffrey Epstein and another is about bears wandering into shops. Each of them have millions of views.

Although there are more Australian videos in their top fifty, it’s still dominated by videos about non-Australian issues.

And many feature intentionally misleading or sensationalist content. Three of the Sky News Australia’s 15 most viewed videos contend or imply that Joe Biden is suffering from cognitive problems — something not supported by evidence.

Alan Jones has been among the most sensationalist out of all the hosts — and he’s been rewarded with views.

His September video downplaying the risk of COVID-19, "Australians must know the truth – this virus is not a pandemic – Alan Jones" has been viewed 2.2 million times on YouTube. (A pandemic was declared by WHO in March and the virus had killed nearly a million people worldwide, including 800 Australians, by the time the video was published). 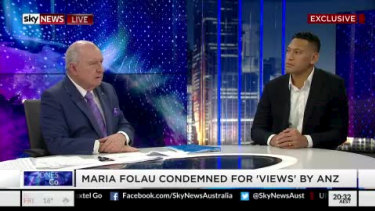 Another video implying that the Democrats had committed election fraud, "There is ‘something odd about postal votes which have magically materialised’ for Biden" had been viewed more than 330,000 times in 18 hours on YouTube. The video had been reviewed by Facebook’s third-party checker Politifact and found to be ‘partly false information’.

Two of the biggest periods of growth in YouTube subscribers and views since the middle of last year have been in May this year, when the channel extensively covered allegations of China covering up COVID-19, and in September, during the channel’s pro-Trump coverage of the lead up to the US election.

According to Dr McKnight, the far reach of opinion content online challenges what he calls the "hopeful description" that Sky News Australia is balanced between news and opinion.

"This upsets the way that Sky News Australia is being ‘straight up’ news in the daytime and right-wing after dark," he said. "In digital, the right-wing material is 24/7."

And this digital growth is introducing new types of audiences to the brand as well as earning them money, according to Sky News Australia's Whittaker. "[YouTube]’s a growing channel, both for in terms of reaching a younger demographic, as well as in terms of a source of revenue," he told Mediaweek.

A US presidential campaign exclusive on Sky News Australia

Bannon is awaiting trial on fraud charges and is accused of being part of an effort to spread misinformation about the US election and COVID-19. He was recently suspended from Twitter and had content deleted off YouTube for saying he’d like to see National Institute of Allergy and Infectious Diseases director Anthony Fauci’s head on a stick.

In the interview, filled with unproven allegations left unchallenged by Markson, Bannon made a new claim regarding the Hunter Biden laptop saga.

Nearly 5 million people have watched the interview on YouTube. Clips have been reposted on Facebook and Twitter and been viewed hundreds of thousands of times. News articles about the interview’s claims had been written — including by other Australian News Corporation publications — and widely shared.

Why Bannon decided to make what he considered an impactful announcement to do with the US presidential campaign on a Australian television station with small viewership numbers wouldn’t have made sense viewed through the lens of traditional reach.

Quietly, almost without anyone noticing, Sky News Australia had cemented itself as an Australian digital juggernaut broadcasting to the whole world.

This story was first published on businessinsider.com.au.