(CNN Business)Reporters covering the White House are furious with top administration officials who they believe have, in grossly mishandling the West Wing coronavirus outbreak, recklessly endangered their lives, according to interviews Monday with nine journalists who cover the White House. Several of these journalists said they do not feel safe at the White House and are actively avoiding the grounds unless absolutely necessary.

“People are angry,” one White House reporter, who like others spoke on the condition of anonymity to candidly express his views, told CNN Business. “It’s recklessness out here.”
Reporters have long voiced concerns about the cavalier attitude the White House has taken throughout the pandemic, flouting basic health guidelines as the coronavirus surged through the United States, claiming more than 200,000 lives. Trump has continued, for instance, to hold large indoor rallies during the pandemic and top officials have refused to wear masks.

“It’s not just frustrating, it’s infuriating,” said one White House reporter. “As White House reporters we put our health at risk every day. We have families of our own. We expect people working at the same facility as us to take the same measures. But they don’t and because of this recklessness we are more worried than ever about our health.”
“It’s a scary situation,” said another reporter.
“It’s not a safe place to work and hasn’t been in a long time,” said a third reporter. “They don’t wear masks. They clearly haven’t cared as much as they should have for seven months — large meetings, large rallies, large everything. No masks on planes. Inconsistent testing. Every life reliant on a rapid testing system that doesn’t really work. And they have mocked and attacked us for pointing that out repeatedly.”
In response to questions on Monday, a spokesperson for the White House said in an email, “Any positive case is taken seriously as is the health and safety of everyone who works on the White House complex.”
The White House spokesperson added that Meadows’ office had reached out to the White House Correspondents Association, the organization that represents journalists covering the White House, to “keep lines open in case those in contact need testing.” And the spokesperson said that when Farah gaggled with reporters without a face covering it was because she had accidentally left her mask while at a Fox News hit. Nevertheless, the spokesperson said that because Farah’s gaggle was brief “it wouldn’t constitute sustained contact.”
Several reporters who spoke to CNN Business, however, were particularly enraged by McEnany’s behavior. After Hope Hicks, a top communications aide to the President, tested positive for the coronavirus on Thursday morning, McEnany still held an indoor briefing with the press later that day.
McEnany has maintained that she did not know about Hicks’ positive test when she held that Thursday briefing. But even after knowing she had been exposed to Hicks and the President, McEnany declined to quarantine, continued to show up to work, and spoke to reporters without a mask. 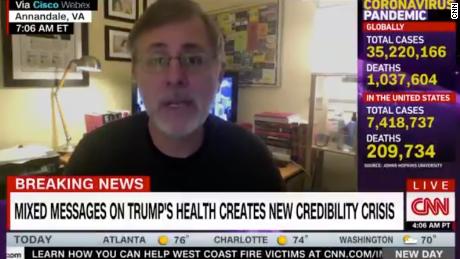 “Kayleigh has so many people f**king furious,” one White House reporter told CNN Business. “It’s hard to overstate it. She recklessly endangered the lives of the people she is tasked to work with.”
“I really think she owes an apology to the people who were in the briefing room on Thursday,” the reporter added.
While the reporters may never get an apology, those who were in McEnany’s Thursday briefing were notified on Monday that they can receive a coronavirus test from the White House on Tuesday, according to a person familiar with the matter.
The White House spokesperson who spoke to CNN Business added that the podium in the briefing room “is situated more than the required [Centers for Disease Control and Prevention] six feet away from reporters.”
After McEnany tested positive, the White House Correspondents Association issued a statement wishing her well and encouraging its members to “continue following CDC guidance on mask-wearing and distancing.”
Several reporters who spoke to CNN Business were not satisfied with the statement and said it was not strong enough. These reporters pointed out the behavior of top officials has posed a safety risk to them and hoped the White House Correspondents Association would take a more aggressive stance toward the White House like it had in previous statements.
“It was bad,” one White House reporter bluntly stated.
“It could have been stronger and it should have been stronger,” said another.
Zeke Miller, the White House Correspondents Association president, declined to comment Monday evening.
Most reporters, however, are now trying to avoid the White House at all costs and only a skeleton crew of journalists have been on-site in recent days.
“Frankly, it’s not a safe place to be,” said one White House reporter.
“I don’t want to go anywhere near there right now,” echoed another.
“I felt safer reporting in North Korea than I currently do at the White House,” tweeted another reporter, Ben Tracy of CBS News. “This is just crazy.”

One reporter who spoke to CNN Business expressed worry about being at the White House and traveling with the President even after he recovers, given how the last week has exposed the White House’s lack of transparency on the coronavirus.
“Before this happened you could trust that we are getting tested and the President and his aides are being tested so we will probably be fine,” the reporter said. “This last week makes you wonder if that’s actually the case.”
Source: Read Full Article