Until now the interrogation of Crown resort witnesses before a commission of inquiry was a nerve-racking exercise aimed at establishing the company’s suitability to hold a casino licence. But when James Packer entered the box it became personal.

It was Packer’s ethics, Packer's conduct and Packer's principles that were questioned – or rather, undermined.

For Packer, as the majority shareholder in Crown, its former executive chairman and the man who counsel assisting has, effectively, accused of operating as a shadow director, the inquiry is attempting to establish whether he is suitable to be associated with the casino group. 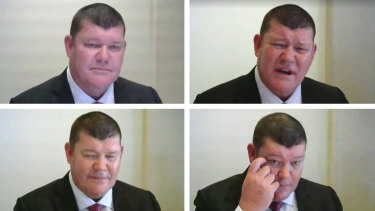 James Packer at the Crown inquiry on Tuesday.Credit:SMH

If the commission recommends against his suitability and the regulator acts on the findings, Packer may be forced to divest Crown.

Counsel assisting Adam Bell landed only one real punch – but it was a body blow.

The inquiry heard of verbal threats Packer made to a private equity executive. It was his testimony’s show stopper. So menacing were the threats that Bell suggested the email recipient may have been "put in fear".

So menacing were the threats that Bell suggested the email recipient may have been "put in fear".

Thanks to Packer's zealously protective QC lawyer, Noel Hutley, who so desperately sought to keep the contents of Packer’s emails from being publicly heard, the precise nature of the threats was not aired.

It’s grist for a fertile imagination.

Packer’s only line of defence was his long time emotional ill health – which during the course of the hearing he publicly named as a bipolar disorder.

The inquiry heard that since 2016 Packer has been heavily medicated – the result of which has been the impairment of his memory – including during the time in which he served as a director of Crown.

The email communications took place while Packer was in "a state of deep personal crisis", Hutley argued to the commission.

But we were given a glimpse into what had so angered Packer that it had resulted in threatening behaviour.

The commission heard that Packer and former chairman Robert Rankin had been secretly working on a proposal to privatise Crown in 2015. They had approached a private equity firm in Los Angeles to secure a $1.5 billion investment. The recipient of Packer’s threatening email was one of the principals of the private equity company – a person who ultimately declined to provide Packer with $1.5 billion and who had instead offered him $400 million.

By inference Packer’s email was a response to his proposal being rejected.

The trouble for Packer is that the conduct code for people associated with a casino licence is higher than for normal directors. It can take months or years to receive probity approvals. 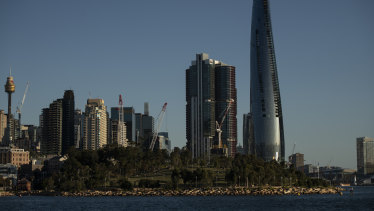 Crown’s Barangaroo casino is due to open in December.Credit:Wolter Peeters

Other than the emails, counsel assisting jumped on a few disparate facts whose focus seemed to be the calibre of Packer’s friends. He was questioned about his friendship with Arnon Milchan, an Israeli billionaire and Hollywood film producer who also worked as a liaison to Israel's secretive Bureau of Scientific Research, procuring weapons for that country's defence forces.

Strange – but not in and of itself incriminating, although Packer had previously described him as "dangerous".

Packer was asked if it was Milchan who introduced him to another friend, Israeli Prime Minister Benjamin Netanyahu who is facing bribery charges over gifts he allegedly received from Packer and others.

The inquiry heard that Milchan and Packer had planned to set up a cyber security business together and had approached another person who the inquiry heard was later connected to Israeli secret service organisation Mossad.

The question of how or whether these strands are connected to the allegedly threatening email will probably remain a secret.