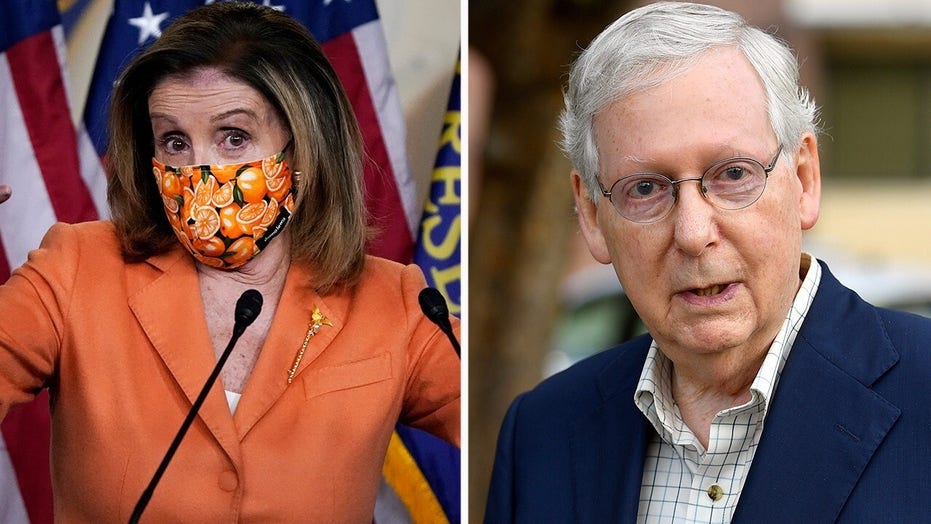 House Speaker Nancy Pelosi said on Sunday that an agreement on a coronavirus stimulus relief package, which is still being negotiated, "could happen" this week but also accused Republicans of "moving the goalposts."

Time appears to be running out for lawmakers to pass a relief package before Election Day, but Pelosi said she would continue to work with President Trump's administration whether or not Democrats keep control of the House of Representatives on Nov. 3.

"People need help right away. What I say to them, though, what we are doing right now is to make the bill bigger, better, and safer for you and the benefits will be retroactive," Pelosi said on CNN's "State of the Union." "We’re making concessions too, you know? … [Senate Majority Leader] Mitch [McConnell] has said keep working, and he doesn't want to do it before the election. We want to do it as soon as possible."

"It could happen this week in the House, but that’s up to Mitch as to whether it would happen in the Senate and go to the president's desk, which is our hope and prayer," Pelosi continued. 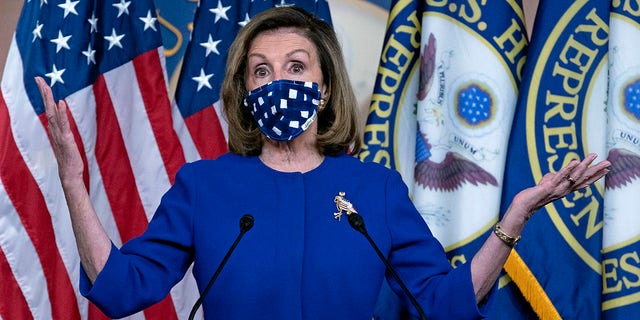 Republicans negotiating the deal have kept increasing the amount they're willing to spend, but a deal continues to stall. Pelosi said her team is waiting on a response from Treasury Secretary Steven Mnuchin and expect it to come on Monday.

"They said we will support the testing language, but with [a] minor touch. Well, that was 55% of the language," Pelosi said. "We are still waiting for the final okay, and that is a central issue in all of this. We cannot just say, president, here is trillions of dollars and spend it any way you have. We have a plan, a strategic plan."

"To do anything, though, that does not crush the virus is really official malfeasance and to crush the virus we have to follow the science, testing, tracing, treatment, mask wearing, ventilation, separation, and the rest," she continued.

Pelosi appeared to brush off a message from the Democratic governors of Michigan, Wisconsin and Minnesota imploring national leaders to "put differences aside and agree to another, much-needed COVID-19 relief bill" earlier in October.

"Welcome to my world. That is not a lot of messages although I respect each and everyone of them. … We all want an agreement. Nobody wants it more than the House Democrats," she said.

Before Pelosi appeared on the show, White House Chief of Staff Mark Meadows had also accused Pelosi and her team of continuing to "move the goalposts" on a deal.

"We're up to $1.9 trillion. … I do have a commitment from Leader McConnell that if we get an agreement, he is willing to bring it the to floor and get it passed," Meadows told "State of the Union" on Sunday.

"They keeping moving the goalposts," she said. "Let’s be hopeful. We are nine days before an election. We’re trying to unify the country."

Related posts:
tagged with Coronavirus, Pelosi, relief, says
Recent News:
Business News:
I started my first job completely remote. Here's how I formed meaningful relationships with my coworkers and stood out when I didn't know anyone.
The pandemic should be a 'Sputnik moment' that reverses our failure to invest in science and research, the top scientist at New York's biggest hospital system says
See the Nike ad that took 4,000 hours of sports footage to make
Nubank and Chubb are launching a life insurance product
Deloitte just snapped up a software firm as it looks to stay ahead of its Big 4 rivals on cloud computing consulting
This website uses cookies to improve your user experience and to provide you with advertisements that are relevant to your interests. By continuing to browse the site you are agreeing to our use of cookies.Ok