Republicans are rushing to save GOP control of the U.S. Senate, spending $20 million in deeply conservative states that have become unexpected battlegrounds as a surge of small-dollar donations gives Democrats the upper hand in states likely to make or break the Senate majority.

As President Donald Trump’s reelection position continues to deteriorate amid his mishandling of the coronavirus pandemic, the GOP is watching Democrats seize the lead in Senate races they once hoped to win and turn states previously seen as safe for Republicans into heavily contested battlegrounds. Democratic chances of winning the Senate and seizing complete control of the federal government are higher than at any point this election cycle.

“The trend line is bad for these guys,” said J.B. Poersch, the president of Senate Majority PAC, the major super PAC backing Democratic Senate candidates. “In my world, there haven’t been a lot of down polls in the past few weeks.”

Democrats have long been confident of victory over incumbent Republicans in Arizona and Colorado, and national strategists in both parties now agree Maine GOP Sen. Susan Collins is unlikely to survive a challenge from Democratic state House Speaker Sara Gideon. Republicans also have been increasingly nervous about the standing of North Carolina Sen. Thom Tillis, though a sex scandal involving his Democratic opponent has allowed Tillis to go on offense in what had been a stable race.

Republican hopes of retaining their majority now rest on sweeping four races in a trio of states that both parties agree are toss-ups ― Montana, Iowa and Georgia ― and also somehow snatching victory from the jaws of defeat in one of the four states that now lean toward Democrats.

At the same time, television ad buys from both parties over the past two weeks make clear the solidly Republican states of Alaska, Kansas and South Carolina are now places for Democrats to pad their majority in the event of a blue wave election. Democratic super PACs have booked $15 million in advertising in the three states, while Republicans have reserved $20 million.

A top GOP operative charged with keeping control of the Senate acknowledged the difficult political environment, and said large donations from major Republican donors were keeping races competitive. Senate Leadership Fund, a super PAC controlled by allies of McConnell, has $126 million in the bank.

“The political environment is as tough as I’ve ever seen it, we have Republican-held seats under siege, and Democrat candidates have a huge financial edge,” said Steven Law, the group’s president. “Thanks to our record-breaking fundraising, we are keeping the fight to defend our Senate majority competitive.”

Republicans had hoped the vacancy on the Supreme Court created by the death of Ruth Bader Ginsburg last month would fire up the party’s base. But so far, the most direct impacts have been harmful to the party. Maine’s Senate race had already begun to tilt toward Gideon, and anything reminding voters of Collins’ votes for past Trump judges was destined to hurt her further.

Gideon almost immediately went up with ads attacking Collins for judgeship votes and linking her to McConnell. “After approving 181 judges nominated by Trump, Susan Collins’ record is clear,” a male narrator says in one of the ads. “She’s not for you anymore.”

At the same time, Collins needed to clarify her own position on when and whether she would support voting on a Supreme Court nominee, which only reinforced Democrats’ portrayal of her as more calculating than concerned.

“They’ve been trying to frame her as wishy-washy, and she’s just been helping them. It just looks like she’s waffling again,” said Toby McGrath, a former top aide to independent Maine Sen. Angus King. “For the past few weeks, I’ve thought this has become Sara Gideon’s race to lose.”

Collins has amped up her attacks on Gideon, questioning her credentials as a Mainer. But public polling indicates little damage has been done and a plurality of Maine voters still have a positive view of the Democrat.

Republicans initially hoped the Supreme Court vacancy and the subsequent nomination of Amy Coney Barrett, while endangering Collins, would engage conservative voters in other states and provide a boost to incumbents, including Montana Sen. Steve Daines and Iowa Sen. Joni Ernst. But there’s been zero indication of a boost for GOP candidates, even in red states.

“We’re not seeing partisanship saving them in Montana or Iowa yet,” Poersch said.

In Alaska, independent candidate Al Gross, who has the backing of national Democrats, raised $9 million ― more than the $7.2 million the United States spent to buy Alaska in the 19th century. Gross is challenging GOP Sen. Dan Sullivan.

Small-dollar Democratic donors have had the biggest impact in South Carolina, where Democrats’ loathing of GOP Sen. Lindsay Graham has made the race competitive. Graham, who over the course of the past four years has evolved from moderate dealmaker to Trump acolyte, is facing a stiff challenge from Democrat Jaime Harrison.

Harrison had raised nearly $30 million through the first six months of the year, and strategists say he may match that sum in the third quarter. That financial power has enabled Harrison to run an unprecedented number of ads, enhancing his own image as a moderate who grew out of poverty and damaging Graham as an untrustworthy flip-flopper.

Nu Wexler, a former executive director of the South Carolina Democratic Party, said Harrison was taking advantage of distrust in the incumbent, enabling him to win over a larger share of white voters than the typical Democrat in the state.

The problem? Candidates are guaranteed lower television advertising rates than super PACs under federal law, so most Democratic dollars are going further than Republican ones.

Republicans’ brightest spot at the moment is in North Carolina, where a sex scandal has rocked Cunningham’s campaign in the past week. Leaked sexual text messages between Cunningham and a woman who is not his wife prompted the Democratic challenger to admit an affair.

Before the revelation, Republicans were becoming less confident in Tillis’ ability to defeat Cunningham, a military lawyer and former state senator. But they are now arguing the affair undercuts Cunningham’s character-focused message and cripples his appeal to crossover voters. Senate Leadership Fund began airing an ad about the scandal earlier this week.

“The US Senate race in North Carolina has been dramatically and permanently altered, not by sex, but by the hypocritical lack of judgment and truthfulness now fully on display by Cal Cunningham,” Tillis consultant Brad Todd wrote in a memo released Thursday. “This unfolding episode destroys the foundation of Cunningham’s campaign by demonstrating that he cannot be trusted at any level.”

So far, however, there is no evidence in public polling that the scandal has significantly shifted what has long been a sleepy race in a politically polarized state. A Democratic group tracking the campaign said its surveys show high voter awareness of the scandal, but almost zero impact. Republicans are hopeful new developments, like the Army Reserve announcing an investigation into Cunningham, will keep the story alive.

Republicans do have a back-up plan, however. Senate Leadership Fund has also invested $10 million in boosting John James, a businessman and veteran challenging Democratic Sen. Gary Peters in Michigan. While most polling shows James trailing, GOP internal polls have him outperforming Trump ― especially with independent voters. Republicans hope a James upset can allow them to block Democratic control if the election turns out closer than expected. 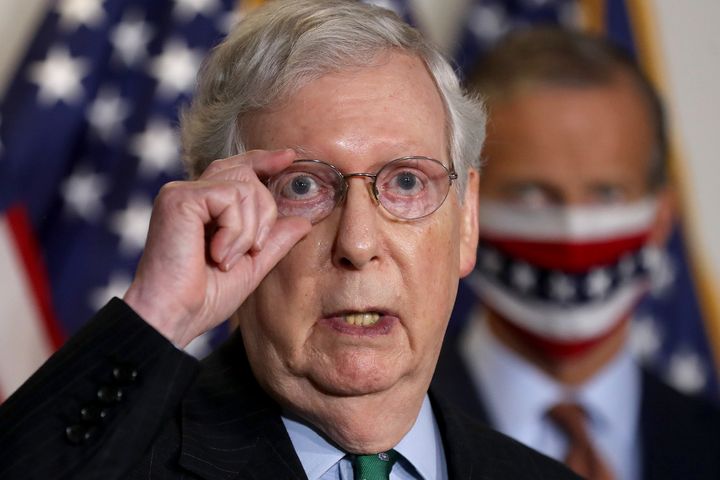 We want to know what you’re hearing on the ground from the candidates. If you get any interesting ― or suspicious! ― campaign mailers, robocalls or hear anything else you think we should know about, email us at [email protected]