Rudy Giuliani, at a federal court hearing in Pennsylvania as part of outgoing President Donald Trump’s long-shot legal crusade to overturn the results of the 2020 presidential election, pounded the table and yelled like hell. Pennsylvania officials, on the other hand, argued both the facts and the law.

While Trump has made absurd and evidence-free claims of mass voter fraud, things haven’t been going well for the Trump campaign in courts, where the candidate who told voters that they’d win so much they’d get “tired of winning” has been on a major losing streak.

One of the last remaining battles is in Pennsylvania, which was a must-win state for the Trump campaign. Trump and Giuliani have said hundreds of thousands of votes should be invalidated in the state because observers were limited in their ability to watch votes being counted, although the Trump campaign effectively scrapped that component of the lawsuit. Biden currently leads in Pennsylvania by more than 73,000 votes.

Giuliani, during Tuesday’s hearing, made broad, sweeping and unsubstantiated allegations of “widespread, nationwide voter fraud.” Giuliani said that Democrats, during the coronavirus pandemic, “were not going to let a serious crisis go to waste,” and decided to use mail-in ballots to steal the election. He said the “Democratic machine” decided to commit voter fraud on a “grand scale.” 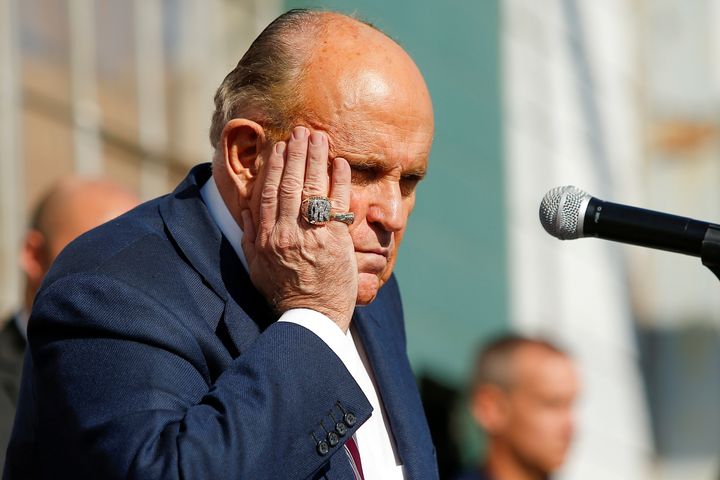 At one point, he claimed more than 1.5 million votes were “entered illegally,” and the Trump campaign has claimed they should be tossed out. Mark Aronchick, an attorney for Pennsylvania counties, called Giuliani’s arguments “disgraceful.” Uzoma Nkwonta, an attorney for the Democratic National Committee, pointed out that ― despite Giuliani’s arguments ― Trump campaign lawyers had not actually made substantive claims of voter fraud in court.

U.S. District Judge Matthew Brann gave Giuliani a lot of leeway to make his argument. But he later pressed the Trump legal team, which he said was asking the court to invalidate more than 6 million votes and disenfranchise “every single voter in the commonwealth.”

“Can you tell me how this result can possibly be justified?” Brann asked.

Giuliani then went on an extended rant about how the votes “could have been from Mickey Mouse” and said it was wrong for election officials to give voters a chance to correct their ballots.

Brann later got Giuliani to admit that ― despite his claims of mass voter fraud during oral argument ― the Trump campaign’s argument did not “plead fraud with particularity.”

The Trump campaign’s amended complaint focuses on “Democratic heavy counties,” alleging that officials in those jurisdictions did a better job than officials in Republican-heavy jurisdictions of allowing voters to fix, or “cure,” problems with their mail-in ballots before Election Day. The lawsuit claims this alleged disparity denied some Pennsylvanians “the equal protection of law,” and seeks to prevent Pennsylvania officials from certifying the results of the election.

Nevertheless, Giuliani used the hearing to talk a lot about the claim that there was no meaningful access for elections observers in Philadelphia. Unfortunately for Giuliani, the Pennsylvania Supreme Court rejected that argument in a separate case Tuesday afternoon, ruling that the regulations were “reasonable” and did in fact allow candidate representatives to observe the board as it counted votes in Philadelphia.

Even some longtime proponents of voting restrictions, like conservative activist and former Justice Department lawyer J. Christian Adams, said that the Trump’s effort in Pennsylvania was a long shot, and that legal claims need to be based on “real evidence,” not made-up evidence.

“There’s no case that ever says not allowing observers in can overturn an election,” Adams said on Fox Business. “That case doesn’t exist. So it’s a heavy-duty ask to ask a federal court to overturn this. I don’t think there’s any chance of that.” (Even so, Adams suggested that Pennsylvania legislators might seek a “political solution” and send Trump electors to the Electoral College, but said there must be a factual predicate that is “reasonable, sound, credible, voluminous.”)

There were some big changes to the Trump campaign’s legal team in the final hours before the hearing. Giuliani, who held a press conference to highlight overblown and unsubstantiated claims of voter fraud at Four Seasons Total Landscaping in northeast Philadelphia on the day that networks called the election for Biden, joined the team.

Another new member of the team, talk show host and attorney Marc Scaringi, previously told his audience that “litigation will not work” and “will not reverse this election,” as The Washington Post reported.

Linda Kerns, a Republican divorce and family law attorney associated with the conservative Federalist Society, sought to be removed from the case, but the judge wouldn’t let her. Kerns previously received an award from the Republican National Lawyers Association, where she told the audience that Philadelphians “treat me like I’m the problem” when she appears in court on elections issues. “But I’m not the problem,” Kerns said.

Kerns previously wrote a letter complaining that voters were dropping off two or three ballots ― presumably from other members of their households ― at Philadelphia ballot box locations, earning a warning from Pennsylvania’s attorney general, who said that the Trump campaign’s initiative of videotaping voters dropping off ballots could be considered illegal voter intimidation.

Related posts:
tagged with 2020 election, Donald Trump, Rud
Recent News:
Business News:
Bill Gross Blames the Help for Loud Music That Annoyed Neighbor
Delta Resumes Only Nonstop Flights to China by U.S. Airlines
Esports Ecosystem Report 2020: The key industry players and trends growing the esports market which is on track to surpass $1.5B by 2023
Nexstar Stations And WGN America Go Dark On Dish Network
AI IN CONTENT MARKETING: How leading marketers are taking advantage of AI to accelerate content generation, better understand content performance, and refine content promotion
This website uses cookies to improve your user experience and to provide you with advertisements that are relevant to your interests. By continuing to browse the site you are agreeing to our use of cookies.Ok