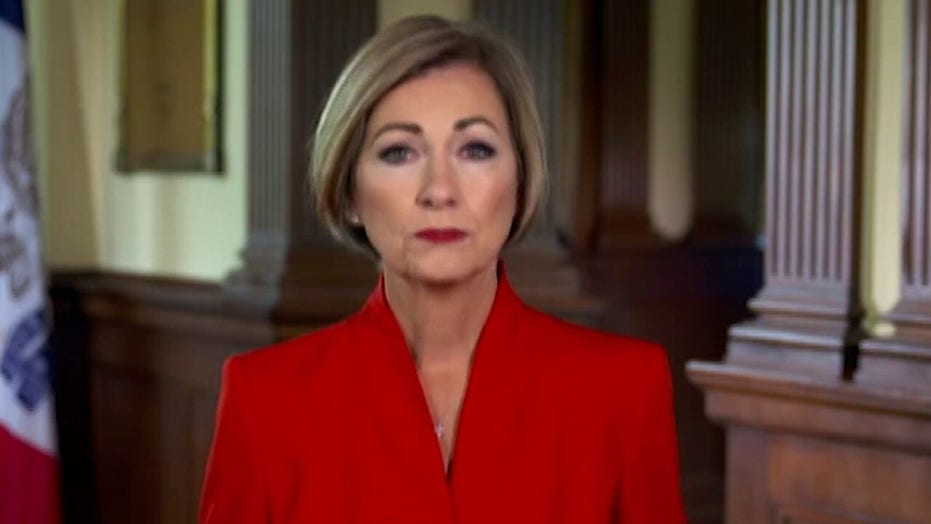 Gov. Kim Reynolds says President Trump has been a great party to Iowa

EXCLUSIVE: Theresa Greenfield, the Democrat challenging Iowa Sen. Joni Ernst for her Senate seat, has admitted to supporting the Black Lives Matter organization in a video obtained exclusively by Fox News, even though her campaign website made no mention of her thoughts toward the group.

Greenfield previously has backed the movement and activists peacefully protesting, but had kept relatively quiet about the organization, which has courted controversy in the past.

“Yeah,” Greenfield said in a video shot in Des Moines on Sept. 17 by media watchdog Accuracy in Media while shaking her head in the affirmative when asked if she supported the BLM organization.

“I don't know if there's any reason it doesn't appear on the website,” she said when asked why the words “Black Lives Matter” did not appear on her campaign’s website. “Let me take a look at it, 'cause I talk about it all the time.”

Greenfield’s husband, Steve Miller, added that she has “been working with all the Black leaders” across the state. He said Republicans were “using that law-and-order thing and we know all about that bull—-.”

The Greenfield campaign did not immediately respond to Fox News’ request for comment.

Black Lives Matter has pursued controversies in the past. Among them: Co-founder Patrisse Cullors described fellow organizers as “trained Marxists” in a newly surfaced 2015 video, and the group apparently deleted a page on its website that called for changes to “the Western-prescribed nuclear family structure requirement” in favor of “extended families and ‘villages’ that collectively care for one another, especially our children, to the degree that mothers, parents, and children are comfortable.”

Matthew Bruce, the leader of the organization in Iowa, has been arrested five times this summer, most recently for allegedly trying to blind police officers with lasers. Following that arrest, he has been accused of planning to shut down the highway and stage a fake hostage situation.

Fifty-eight percent of Iowans believe the ongoing protests have been more harmful to the cause of raising awareness of racial issues in the country, according to a poll conducted by the Des Moines Register.

Greenfield, a real estate developer, and Ernst sparred on the issue of law and order in Iowa’s first senatorial debate on Sept. 28.

Greenfield said “systemic racism” has been built into all of America’s systems, including the police, while noting she didn’t think police officers themselves are racist.

Meanwhile, Ernst, who is fighting for her second term in the Senate, said she “doesn’t believe” there is systemic racism built into law enforcement, but does believe there’s work to be done.

Greenfield leads Ernst by 4.8 points, according to an average of polls compiled by RealClearPolitics.

The third and final debate between the two candidates will take place on Oct. 15.

Correction: An earlier version of this story said Ostby's wife told him to "make sure" Greenfield supported Black Lives Matter before signing up. That comment was made by the person who shot the video, not his wife.

An earlier version of this story said Ostby's wife told him to "make sure" Greenfield supported Black Lives Matter before volunteering. That comment was made by the person who shot the video, not Ostby.