Some American Catholics sifting through Pope Francis’ latest encyclical this week are seeing it as a strong indictment of President Donald Trump’s nationalist agenda.

Francis’ new encyclical, released Sunday with the title “Fratelli Tutti” (“Brothers All”), wasn’t written as commentary on a specific country’s politics and doesn’t explicitly mention Trump. But given the letter’s sharp rebuke of “violent nationalism,” selfish tribalism, and “trickle-down” economic theory, some Catholics reading the letter from a U.S. context believe it has implications for the faithful as they face the 2020 presidential election.

“This encyclical challenges Catholics across the ideological spectrum with its call for a better kind of politics that puts the common good at the center of our debates,” said John Gehring, Catholic program director for the advocacy group Faith in Public Life Action. “But I do read the pope’s sharp criticism of nationalist trends and anti-immigrant populism as a critique of Trump’s ‘America First’ agenda.”

In the encyclical, the Argentine pontiff lamented how fractured society has become and criticized the way that “hyperbole, extremism and polarization have become political tools.” He bemoaned the fact that some political leaders speak crudely with impunity, in ways that just a few years ago would have meant the “loss of universal respect.” He suggested that free-market capitalism and trickle-down economic policies have failed and encouraged people to combat the “structural” causes of poverty and inequality. Francis decried the xenophobia and “aggressive nationalism” bubbling up in certain countries and warned against the temptation to “raise walls, walls in the heart, walls on the land.” 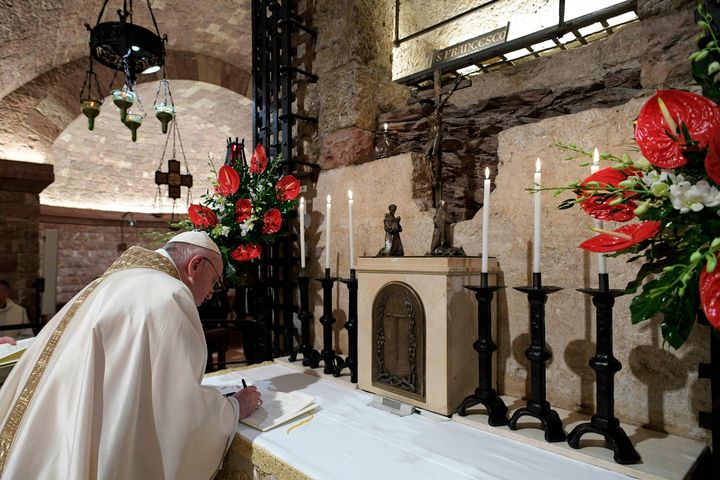 While presenting his vision for a world where people truly care for each other, Francis called on countries to “welcome, protect, promote and integrate” migrants fleeing humanitarian crises. People in some host countries are fearful of migrants and forget that they possess the same intrinsic dignity as any other human being, the pope wrote.

“For Christians, this way of thinking and acting is unacceptable, since it sets certain political preferences above deep convictions of our faith: the inalienable dignity of each human person regardless of origin, race or religion, and the supreme law of fraternal love,” he wrote.

Gehring said he found it “revealing” that the “small but vocal chorus” of Catholic bishops who have publicly diminished Democratic candidate Joe Biden’s Catholic faith, as well as pro-Trump Catholic advocacy groups have said little about the encyclical, which is considered the most authoritative form of teaching a pope can give.

“The pope is offering a broad analysis that opposes trickle-down economics, expands the definition of what it means to be ‘pro-life,’ and rejects nativist nationalism as un-Christian,” Gehring said. “None of that is particularly useful for the electoral goals of many on the Catholic right.”

“[America’s] elected leaders have failed in their responsibility to care for the least among us, with millions of Americans worried about getting sick, finding their next meal, or paying rent,” Campbell tweeted. “These politicians – notably in the Senate – have failed to give communities ravaged by the COVID-19 pandemic the resources they need to survive. This is a failure in moral leadership and Catholics cannot stand for it.”

Encyclicals serve as teaching documents for the world’s Catholics, and, as Francis puts it, for “all people of good will.” The letters aren’t meant to hold veiled messages for any specific country. Previous popes have used encyclicals to focus the church’s attention on issues such as workers’ rights, nuclear weapons and birth control.

“Fratelli Tutti” ruminates on themes Francis has addressed frequently during his papacy. He has spoken often about the plight of migrants, going so far as to resettle groups of refugees in Italy as an example to Catholics around the world. Francis has clashed with Trump on the president’s goal of building a wall on the U.S.-Mexico border, claiming in 2016 that “a person who only thinks about building walls … and not building bridges, is not Christian.”

Francis also makes an effort in his letter to demonstrate the importance of interdenominational and interfaith dialogue. The pope said that he drew inspiration from several non-Catholics for the encyclical, including Rev. Martin Luther King Jr., South African Archbishop Desmond Tutu and Indian independence leader Mahatma Gandhi.

Francis made repeated references throughout the encyclical to Sheikh Ahmed al-Tayeb, a spiritual leader at Egypt’s Al-Azhar Mosque, Sunni Islam’s most prestigious seat of learning. Last year, Francis signed a historic declaration of fraternity with the imam calling for peace between religions and declaring that religious extremists are actually deviating from true religious belief and manipulating religion for political reasons.

While Trump has made overtures to Muslim diplomats from the Middle East, he doesn’t have a good reputation among Muslims in his own country. He came to power on a platform that explicitly called for a ban on Muslim immigration and has often resorted to anti-Muslim rhetoric to stir up his base. As president, he has promoted inflammatory anti-Muslim videos on Twitter and voiced support for GOP candidates who hold blatantly Islamophobic views. 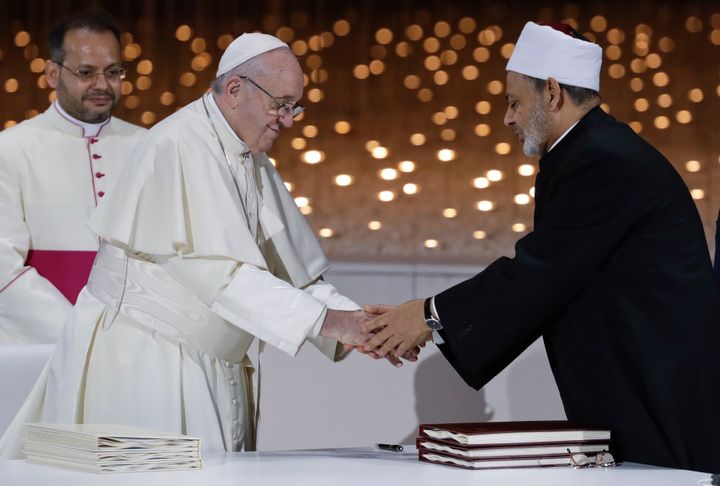 “He is clearly determined that religious belief, or lack thereof, won’t be an obstacle to fraternity and social friendship on his watch,” Ward said of the pope.

The document also contains a “challenge to anyone who’s tempted to conduct their life in society along aggressive lines, viewing others as enemies and inciting violence.”

“President Trump seems to be pretty gleeful about his division of people into those who are with him, and those who are enemies. That is a behavior this document really condemns,” Ward said.

In the past, Francis has challenged Catholics to treat their concern for the lives of the poor, sick, and marginalized as “equally sacred” as the “unborn.” The pope restated the church’s longstanding opposition to abortion in the encyclical, but did so while discussing other groups he believes should be protected ― the poor, disabled, elderly, and victims of human trafficking.

E.J. Dionne Jr., a columnist for The Washington Post who identifies as Catholic, pointed out in an op-ed on Sunday that the word “abortion” doesn’t appear in the document, but that Francis included 12 references to the death penalty, which the pontiff claimed is “inadmissible” in all cases.

This clear condemnation of the death penalty comes less than two weeks after one of the most prominent Catholics in the Trump administration, Attorney General William Barr, received a special award at the National Catholic Prayer Breakfast ― despite the fact that Barr cleared the way for the federal government to resume capital punishment.

Dionne wrote that it will be hard for Americans to read “Fratelli Tutti” outside the context of the presidential campaign.

“The themes of his encyclical … will make it much harder for conservative and right-wing Catholics to insist that the only orthodox vote is for Trump,” he wrote. 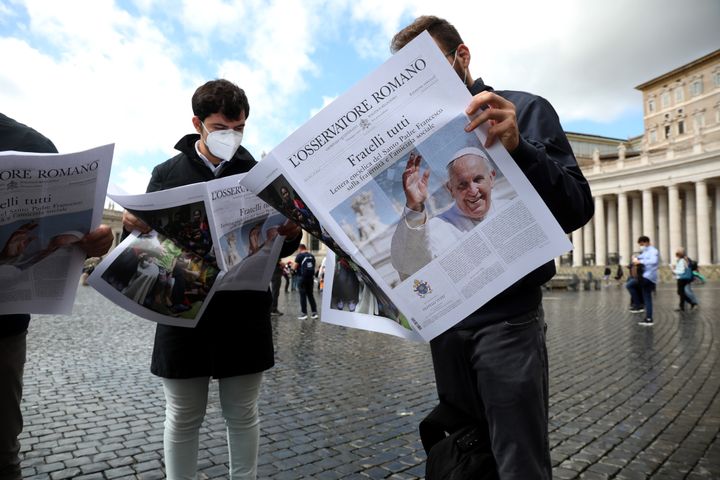 Ultimately, the biggest challenge for all U.S. Catholics is Francis’ call for dialogue and acceptance of others’ differences, Ward said ― something she believes Americans have trouble with.

“We want there to be good and bad characters in the drama, and there are only two sides and you’re either on ours or you’re on the bad side,” she said. “[Pope Francis] envisions a society of not binomial difference, but true plurality, where our discussion about what we can do to help the excluded starts from allowing others ‘to be themselves and be different.’”

“For me, it is just a balm to hear Francis diagnosing our hurting world so clearly and saying that it’s possible we can all do better,” she added.